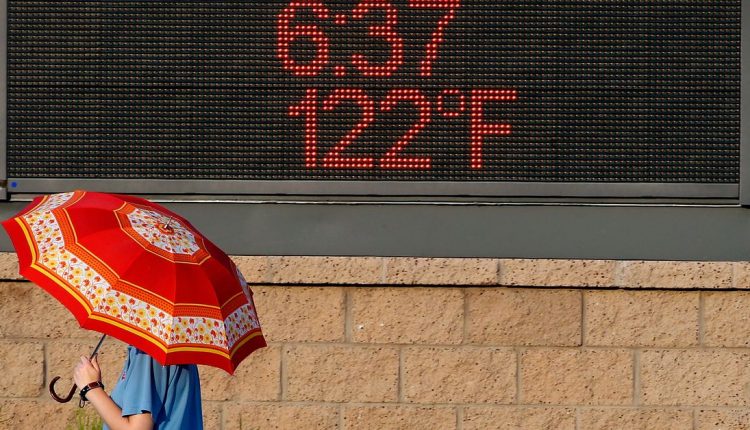 People are still moving to hot, dry places like Phoenix and Las Vegas

Even with the passage of the Inflation Reduction Act — which, name aside, is the most ambitious piece of climate-related legislation ever passed by Congress — the US is locked into decades of rising temperatures and more extreme weather. Just how warm it will get will depend on how quickly we can reduce carbon emissions and how sensitive the climate proves to be, but average global temperature increases of between 2 and 3 degrees Celsius above pre-industrial norms seem most likely, with some regions experiencing much worse extremes.

Nonetheless, Americans are responding to these forecasts by moving in large numbers to some of the hottest, driest, and most vulnerable parts of the country.

According to an analysis published earlier this month by the Economic Innovation Group, 10 of the 15 counties last year were in the water-strained Southwest. Since 2012, an additional 2.8 million people have moved to counties that spent the majority of the past decade under “severe” to “exceptional” drought conditions.

Leading the way in growth was Maricopa County in Arizona, home to Phoenix, a desert metropolis that receives more sunshine than any other major city on Earth — and averages more than 110 days with highs of at least 100°F. Average temperatures in Phoenix are already 2.5°F hotter than they were in the middle of the last century, which helps explain why there were 338 heat-associated deaths last year in Maricopa County.

Despite that — and despite worse to come — the population in Maricopa increased by 14 percent over the last decade, to nearly 4.5 million people. A similar pattern is at work in states like Florida and South Carolina that experience high storm and flood risk, or in states like Colorado and Idaho that face major wildfire risk. Altogether, according to an analysis from the real-estate site Redfin, the 50 US counties with the largest share of homes facing high climate and extreme weather risk all experienced positive net migration on average between 2016 and 2020.

On the flip side, the 50 US counties with the biggest share of homes facing the lowest climate and extreme weather risk, like Onondaga County in upstate New York, largely experienced net negative migration during the same years on average.

This bears repeating: Faced with growing costs from extreme weather disasters and the certain reality of a warmer and more disrupted future, Americans have been responding by not only moving toward riskier areas, but also moving away from safer ones.

What should we take away from this?

One, while Americans do care about climate change, when it comes to the major decisions they make, it tends to rank far down on national priorities.

Each week, we explore unique solutions to some of the world’s biggest problems.

Two, given that economic concerns tend to rank so highly among Americans, it shouldn’t be surprising that cost of living is a much bigger driver of where people want to live than fear of climate change or disasters. Places like the Southwest and Texas aren’t just hot, dry, and vulnerable to climate change — they also tend to be much cheaper to live in than coastal cities in blue states.

According to Redfin’s data, of the 50 counties that had the largest share of homes facing high heat and storm risk, more than 50 percent had a median home sale price that was less than half the national average at the time. Williamson County in Texas, which includes parts of fast-growing Austin, has the highest heat risk in the US, yet it’s also the county that has seen the biggest population increase since 2016.

It’s not true that if you’re looking for a cheap place to live, your only choices are deserts and floodplains. Can I interest you in Syracuse, New York, or Cleveland, Ohio — two cities considered to be climate havens where housing is relatively cheap?

Probably not. Population in either city has dropped significantly from its earlier peak, which is also true for other northern climate havens like Buffalo. (Although Buffalo just recorded its first population increase since World War II — Josh Allen fever, maybe?)

What the fast-growing cities of the Southwest have going for them is just that: growth. That means more jobs and a better chance at economic mobility, all while paying much less for housing than in high-wage cities on the coast. For many Americans, that’s worth the trade-off of worsening heat waves and other extreme weather.

One last thing: Americans apparently just prefer it hot. A 2009 survey from Pew Research found that 57 percent of Americans preferred to live in a warmer climate, compared to 29 percent who preferred a colder one. And the rise of remote work is only likely to give more people the ability to pick where they want to live.

I doubt we’re going to slake Americans’ apparent thirst for as much sunshine as possible. (Though, honestly, as someone who prefers it at least chilly, you can keep your Phoenix weather.) But unless we want a future where ever more people are in the path of ever greater climate change and weather disruptions, we’ll need to make it less expensive to live in places that aren’t subject to heat waves or droughts or wildfires.

California is one example. The state’s horrific wildfires have been producing climate migrants in recent years, in part because the fires can consume whole towns, and in part because there’s no real way to adapt to the constant threat of smoke and destruction.

Yet people keep moving to wildfire-prone areas of the state — and often staying even after a fire destroys their home — in part because the perennially restricted housing supply in the state makes it virtually impossible to live anywhere else. A report last year found that between 1990 and 2010, half of all new homes constructed in California were built in the wildland-urban interface, the zone most vulnerable to wildfire risk, in part because anti-development regulations elsewhere simply make it easier and cheaper to build there.

Fighting climate change first and foremost means reducing carbon emissions, but it will also require decades of adaptation — and that includes housing policies that can steer people away from those parts of the country that are already at risk by making it cheaper to live in safe areas .

This doesn’t mean that Americans can’t or shouldn’t ever move to hot, dry places in the country. In their own way, desert metropolises only exist because of technological adaptations to their extreme climates — population growth only truly took off in the Sunbelt after the advent of air conditioning in the second half of the 20th century. But continuing that growth in a hotter and third 21st century will require much more than just massive AC units.

Cities like Phoenix and Las Vegas have taken major steps to get more use out of less water, banking aquifers, reducing waste, and recycling wastewater. In Phoenix, total water use is actually less than it was in the early 2000s, even as its population has continued to grow, and the average resident used 29 percent less water in 2019 than in 1990. Southern Nevada as well has reduced overall water use even while adding hundreds of thousands of people.

It won’t be easy, though, and the more extreme climate conditions become, the more difficult it is to adapt. Lake Powell and Lake Mead — the two biggest artificial reservoirs in the US, which help supply water to 40 million people — are now at just around 27 percent of capacity. Poorer residents are less able to afford the air conditioning that can make desert heat bearable, while agriculture — which accounts for the vast majority of water consumption in the American West — will keep draining dwindling supplies.

If we’re truly going to adapt to extreme weather, we’ll need to make climate havens cheaper and more attractive. And if you’re in the market for a move, give Buffalo a thought! It has new apartments, new jobs, even new people, along with something that will become increasingly rare in the future: snow.

A version of this story was initially published in the Future Perfect newsletter. Sign up here to subscribe!

Is Buying a Used 2017 Hyundai Tucson a Smart Choice?