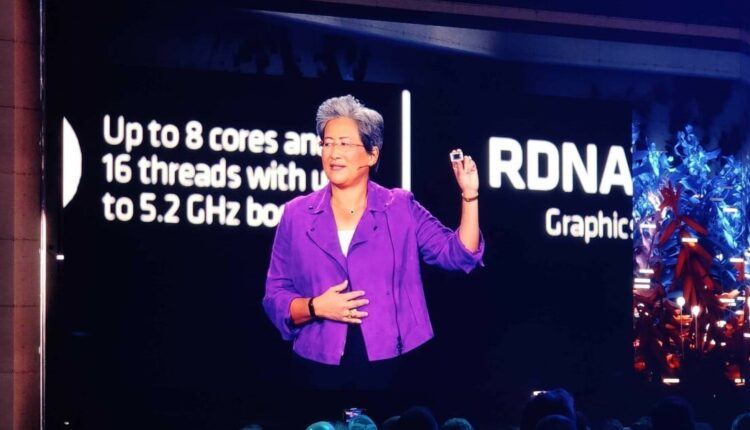 AMD CEO and President Dr. Lisa Su led off the night before the big show with a commanding run-through of a wide-ranging slate of AMD innovations, from client PC processing to exascale data center AI solutions. The new mobile chips debut alongside a buffet of new Ryzen 7000 desktop CPU options; these include a handful of Ryzen 7000 chips lower-cost than the 2022 first wave, plus a trio of 3D V-Cache-enhanced processors that profess to tip up gaming frame rates for performance enthusiasts.

Before we jump in: To make sense of the new-for-2023 mobile chips, we’ll point you, as an aside, to our earlier article, and AMD’s decoder wheel, which lays out the tenets of AMD’s new mobile-CPU naming and numbering conventions.

Probably the most intriguing of the mobile lot will be the Ryzen 7040 series, dubbed “Phoenix” in the run-up to launch. These are the chip maker’s latest line of HS-class CPUs. (The higher-end HX chips are code-named “Dragon Range” and are a fundamentally different line; more on them in a moment.) These chips will be meant for ultrathin laptops and range from 35 to 45 watts. They are based on the latest “Zen 4” architecture, are built on a 4nm process technology, and feature a basic integrated APU for graphics acceleration. Expect to see them in premium thin notebooks and commercial models.

The most interesting angle of these chips is the inclusion of a dedicated AI engine, which AMD is dubbing “Ryzen AI.” Some of the technology integrated here is fruit borne of AMD’s acquisition of Xilinx(Opens in a new window) last year, and is based on a new architecture, XDNA. With pervasive AI coming to the fore in 2023 as a mega trend, this AI hardware integration into the CPU is a big step forward for the model of the modern CPU, as working with AI-based data sets with low power overhead and minimal performance impact will become increasingly vital, even in consumer devices.

Simple examples, brought forward by AMD keynote guest Panos Panay of Microsoft, of today’s features that employ AI hardware in this localized way include video conferencing enhancements such as realtime background-blur and eye-tracking calculations. In time, “AI is going to reinvent how you do everything on Windows,” noted Panay. AMD is confident enough in Ryzen AI to put it up against the neural engines in Apple’s late-model homegrown CPUs.

The chips in the 7040 series will employ up to eight Zen 4 cores, and basic display-driving integrated graphics based on AMD’s latest (RDNA 3) graphics architecture. The Ryzen AI engine will be capable of up to 12 trillion AI operations a second.

Even more eye-popping: AMD is claiming some 7040-based laptop models will deliver over 30 hours of battery life. dr Su noted that more than 250 Ryzen 7000 laptop design wins should launch this year, and the first Ryzen 7040 series laptops will appear in March.

The Ryzen 7045 series may sound similar to the 7040, but these HX-class top-end flagship chips are actually fundamentally different: They don’t have the Ryzen AI hardware on them that the 7040 line does. Still, these are some beastly CPUs, designed for gamers and pro content creators…

These chips, built on 5nm, are AMD’s debut of chiplet-style architecture on laptops. The integrated graphics are light-hitting RDNA 2 solutions, just functional enough to light up a display, more or less. The 7045 will come in varieties ranging from the 16-core/32-thread 7945X to a Ryzen 5 with six cores.

Performance claims on this class, around gaming, with the flagship 16-core chip are from about 30% to 60% better frame rates in the most extreme cases vs. the Ryzen 9 6900HX. Expect just shy of a 20% uptick in single-threaded performance.

AMD is also rolling out a slate of eight new Ryzen chips based on Zen 3 or 3+ architectures, dubbed “Rembrandt-R” and “Barcelo-R.” These are 6nm chips with older integrated graphics architectures, and come in varieties from four to eight cores, all supporting thread-doubling.

Also in the 7030 line will be a trio of Ryzen Pro parts that are roughly equally equipped as their non-Pro counterparts.

Get Our Best Stories!

Sign up for What’s New Now to get our top stories delivered to your inbox every morning.

This newsletter may contain advertising, deals, or affiliate links. Subscribing to a newsletter indicates your consent to our Terms of Use and Privacy Policy. You may unsubscribe from the newsletter at any time.