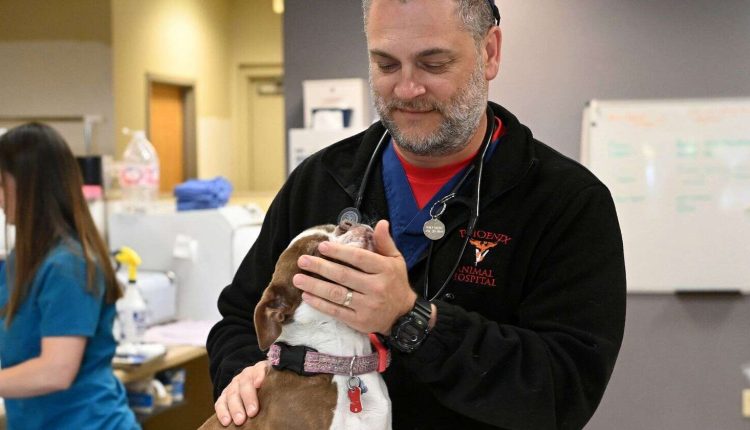 Phoenix Animal Hospital is being rebuilt after it was destroyed in the Almeda Fire. [Andy Atkinson / Mail Tribune]

On the day of the Almeda Fire, staff at Phoenix Animal Hospital saved themselves and the animals—everything else burned, said Brittney Gilman, office manager for the hospital.

They believed, like many other Almeda Fire survivors, that the evacuation was only a formality and they would be able to return soon. Just to be safe, staff members took the patients back to their families. The resident clinic cat, Benjamin, also was taken out of harm’s way.

Now, after two years in a temporary location in the Winco Shopping Plaza in Medford, the hospital rebuilding project is in the home stretch of construction.

“It took about a year and a half just to get permits approved,” Gilman said.

From the outside, the new Phoenix Animal Hospital looks like it’s ready for patients, but the fresh coat of paint applied to the exterior last week is deceiving, Gilman said. The floors and walls inside are still being built.

“We’re thankful we have a place we can be,” Gilman said of their temporary quarters in Medford. “But it wasn’t designed to be a vet hospital.”

The animal hospital is in a space previously used by Valley Immediate Care, which contains larger — but fewer — exam rooms than their furry patients require. Most of the exam rooms are used as operating rooms for surgeries, so patients can’t be separated and seen the way they normally would be, complicating how animals are cared for, Gilman said.

Pet owners can’t come inside, so all customer service is done curbside, with one exception — an exam room set aside for saying goodbye.

To further complicate the hospital’s recovery, it is down to one doctor. The hospital had three before the fire, but one moved away, and another retired.

dr Glen Winters works 10 hours a day, four days a week, and a half day Monday. He performs surgeries in the morning and sees patients in the afternoons, even over lunch, Gilman said. The rest of the staff support him as best they can, working long hours alongside him. The doctor and staff also stay late in the evenings as needed for emergency cases.

“We’re hoping when we move that will attract more doctors. They’re really hard to come by,” she said. “There’s only so many patients he can see in a day.”

The temporary hospital’s limited space and manpower often keep them from accepting new patients, but they try not to turn away birds, reptiles or other small animals, Gilman said, because they are one of the few vets in the area that care for these species.

The new building is expected to be completed by January or February.

“Our lease is only good here until January. That’ll be the two-year mark we’ve been in this location,” Gilman said. “So we’re hoping for January.”

Tucson’s TENWEST is back with a party, biz pitches and more