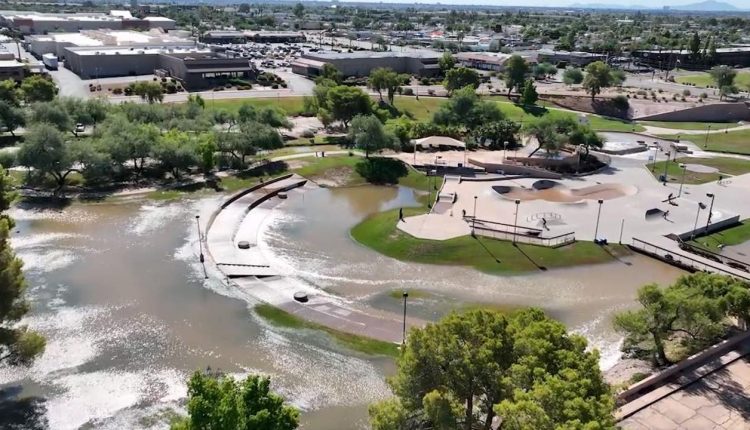 PHOENIX – Much of the Phoenix area spent Saturday cleaning up after a punishing monsoon storm swept through on Friday.

From flooding and topped trees to huge power poles pushed to the ground, the damage from the storm stretches all across the valley.

At WestWorld in Scottsdale, tents were ripped, and the Scottsdale Police Mounted Unit barn even flooded, causing police horses to be moved to safety during the storm.

El Dorado Park in Scottsdale looked more like El Dorado Falls after the last 24 hours drenched the area. More than three inches of rain fell across parts of Scottsdale at the height of the storm, making it dangerous for drivers and rescue crews.

“We had 18 vehicles that were trapped underneath power lines. We were able to remove 10 of those vehicles and 8 were left behind,” says Scottsdale Fire Capt. Dave Folio.

Crews worked with APS to kill the power to get people out of their cars safely near Scottsdale and Cactus roads, but even the following day, those roads were shut down where the power lines fell, leaving drivers to find another way around the mess.

“This has been a very busy, active monsoon, as everybody knows. I’ve barely had a couple days off in a row of not chasing, and our drought, there’s a dent in that, so it’s been very, very busy,” Folio said.

Storm chasers like Mike Olbinski have been following this monsoon season closely, taking advantage of every opportunity to photograph the power of mother nature in the desert, and reading radar and models to chase them down.

“Where the instability is going to be, what the winds are going to do, where they think storms are going to fire, and it’s pretty amazing how accurate these models are,” Olbinski said.

A rescue helicopter had to be called out to Scottsdale on the night of Aug. 12, after a woman was trapped by raging floodwaters at a skate park in the area. A powerful storm earlier in the day brought heavy rain to the area.

Shocking footage was captured all around Arizona by viewers on Aug. 12, showing high winds, heavy rainfall and flooding of roads.

FOX 10 photojournalist Brian Kae took drone video of the aftermath of a monsoon storm that caused heavy flooding at Eldorado Park in Scottsdale.