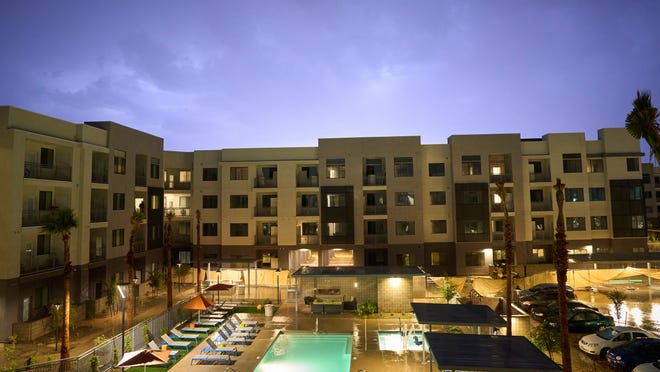 Much of the Phoenix area was cleaning up Monday after thunderstorms from the remnants of Tropical Storm Kay dumped upwards of an inch of rain in parts of the Valley on Sunday night.

More rain was on the way later Monday, the National Weather Service said.

About 7,000 Arizona Public Service customers faced outages from the storms, the company said, noting most regained service within an hour.

The Arizona Department of Transportation announced Monday morning that crews in the area of ​​Interstate 10’s Broadway Curve Improvement Project would inspect the new 48th Street bridge following the storm.

Marcy McMacken, a spokesperson for ADOT, said in an email that the bridge itself was not affected by the storm. However, some temporary wood formwork was damaged by the winds and had to be replaced.

All lanes reopened around 8:15 am, according to McMacken.

Rain gauges reported rainfall of half an inch to one inch throughout most of the Valley, but in places like Queen Creek, that number reached upward of 1.25 inches, according to the National Weather Service’s Phoenix office.

In Queen Creek there were flooded roads and a fallen tree due to the storm that were cleaned up quickly according to Sony Wasu, a spokesperson for Queen Creek.

A representative for the weather service said the moisture comes from remnants of Tropical Storm Kay, which also caused storms in Arizona last Friday.

Phoenix Sky Harbor International Airport reported 28 flights diverted Sunday night, in part due to the thunderstorms, as well as a fire alarm in the Air Traffic Control tower.

The weather service said there is another round of thunderstorms expected Monday evening, with potentially heavy rainfall in some areas.

Flash flood warnings and severe thunderstorm warnings were in effect throughout the state Sunday night, and many have continued into Monday morning. Most of southeast, central and northwest Arizona were under a flood watch as of 10:30 am Monday. This watch included Tucson, Flagstaff and Prescott, and goes around the northern edge of the Phoenix valley.

Two mattresses on fire in a trailer in Yuma