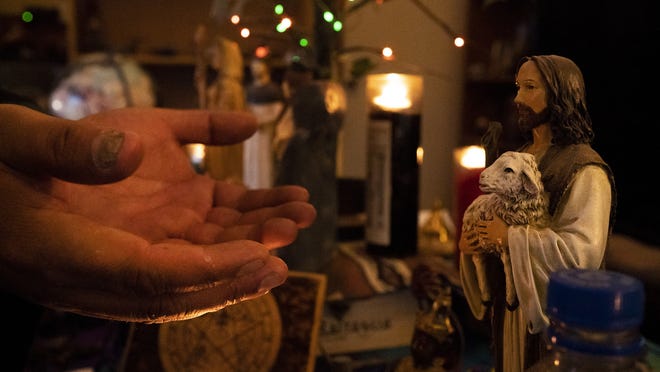 As October draws to an end, the veil between the living and the dead is thinning, Jesse Serpa and Kaitlyn Stone calmly announce in between their preparations to honor departed loved ones.

Serpa, 47, and Stone, 29, are among Valley-based witches who will be celebrating Samhain from Monday evening through Tuesday evening.

This time is a natural bridge between both realms, Serpa, a pagan priest, said about the energy fellow practitioners observe on the dates commonly celebrated as Halloween and Day of the Dead.

These dates mark the start of the spiritual new year for those on the pagan path like Serpa and Stone, who say they summon power through nature while ensuring they harvest it back.

Besides witchery, paganism draws from traditions largely outside the Abrahamic faiths.

However, pagans and Wiccans make up less than 1% of the national population in a Pew Research Center study released in 2014.

Serpa and Stone are members of Sacred Spiral Pagan Church of Arizona. On a recent Sunday night under a full moon, around 30 congregants gathered in a public park in Mesa.

TV and film have propagated fears about witches by emphasizing the macabre, Stone said. But social media has provided safe spaces for people to create online covens, she added.

“Media as a whole has been a boon,” Stone said. “Whereas Hollywood’s been quite the bane for us.”

Paganism’s fluidity and pluralism called to Serpa and Stone when they first started practicing several years ago.

“We believe in the innocence of everybody,” Serpa said of pagans. “We learn from other religions and we never judge.”

Witch finds empowerment in her ‘craft’

Stone feels paganism allows her, as a woman, to wield power unlike what she experienced in her Catholic bringing up, she said.

Her early ranch life in Arizona provided a resourceful classroom to hone her skills in witchcraft, also simply referred to as “the craft.”

It was there where she first started to collect the animal bones populating the altars that now fill her downtown Phoenix home.

The bones include skulls from coyotes, javelinas and deer — some she came upon and others she hunted. All have proven to be well springs of energy useful for her when she is seeking relaxation from and inspiration for her work as a graphic designer, Stone shared.

“Whether that (energy) was the spirit of the animal that passed or just that they were a good medium to break in between the veil between us and the beyond,” she said.

Though the bones she collects are not used as a source of divination to foresee the future, Stone said other witches do use objects for such purposes. For Scottsdale resident Michelle Hall, 41, tarot is her divination tool.

Hall mentioned how her sense of intuition as a witch helped her as a registered nurse, prompting her to request bloodwork be done on a seemingly fine patient who proved to be bleeding internally.

Hall eventually left the field and has since dedicated herself to refining her craft.

“I took time to rediscover myself, rediscovered things that brought me joy,” Hall said. She learned astrology and crystals after leaving nursing and, in the process, she renewed “a very strong sense of connection to spirits.”

Like Serpa and Stone, Hall said she embraces how witchcraft is “not restrictive and it allows you to work with the things that you’re comfortable with or that you connect with.”

This is a time of year when Hall pays tribute to her late grandmother who delighted in the seasonal festivities even when in hospice in her 70s. The ashes of Nana Christine now rest on an altar. For Samhain, her granddaughter will light a candle and place a bowl of chili, a meal the family would enjoy over a bonfire every Halloween.

‘Out of the broom closet’

The journey Serpa took to becoming a witch started more than 15 years ago when he broke from his Christian church. He said parishioners shunned his two sons for being autistic.

Born and raised in Phoenix, the former US Army service member found himself without a religious home.

Then, he said a friend came “out of the broom closet” and confided to him that she was a witch.

Serpa was all in to join his friend as a witch. Serpa said paganism helped him overcome a bout with cancer.

He would later introduce paganism to his wife, Linda, 46. The couple may still have an affinity for Christianity, Jesse Serpa said, but they are witches in identity and practice.

Every Samhain, Serpa takes time to reflect on the memory of those he has lost, be they a military friend or his father. This year, he is honoring one more soul.

His 91-year-old aunt died peacefully on Oct. 21. The affection he had for the woman he called Nina helped remind him a few years ago that the craft must be exercised with care.

While at an assisted living facility in central Texas, Nina showed signs of bruises and pleaded to be released from the care of an employee there. Serpa cast a spell, which he likened to a prayer, to send an angel to watch over Nina.

Soon after, Serpa said, Nina’s children told him the caretaker fled the facility and refused to return. The caretaker cried she had seen a dark figure oozing slime in a bathroom mirror’s reflection, Serpa was told.

This left Serpa worried his spell work conjured an evil entity. He recently found solace knowing he was acting in good faith and not trying to attract negative energy.

Pagans “take personal responsibility of their actions because whatever good or bad they do, the karma comes around,” he said.