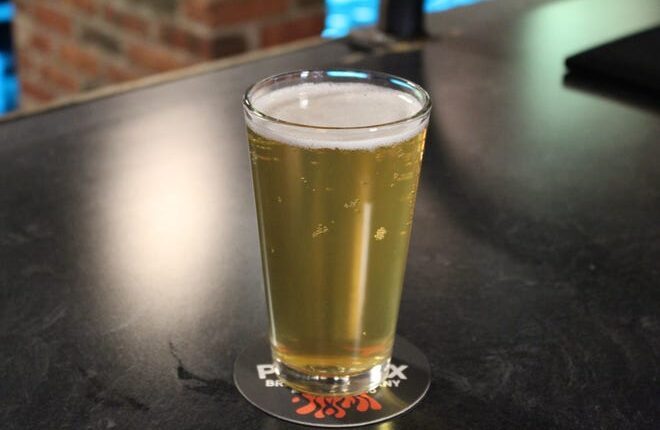 The Phoenix Brewing Company at 131 N. Diamond Street has a new beer it wants customers to taste.

On Tuesday, the Phoenix introduced its new low ABV (Alcohol by volume) beer called The Fledgling to kick off “Dry-ish January.”

The Fledgling is the Phoenix’s new table beer, with a 2.5% ABV and sells for a lower price point. Most hand-crafted beers at the Phoenix have an average ABV of 6%. Table beers, which have been around since the 18th century, are historically low-alcohol-content beers suitable for everyone at the table, from youths to senior citizens and every age in between.

“We were talking for a while about getting a fewer more lower gravity beers on our portfolio,” said Carmone Macfarlane, the Head of Creative and Marketing at the Phoenix in Mansfield. “A lot of our beers are in that 6% average. Budweiser is in the 4%. This beer comes in the 2%, which is nice, especially around January where people would want to have a dry January or just looking to find something a little more lighter to have than what they had during the holiday season.”

The Fledgling named for a bird taking flight

Macfarlane then explained how the name “Fledgling” came about.

“So, like a bird just taking flight. We picked the name because it’s one of those beers that’s lighter. Most of the beer names we have, we try to keep within a specific kind of genre and that’s related to the beginning stages of the Phoenix. Referencing the early stages of flight for a bird.”

Macfarlane said that the Phoenix’s system is efficient with brewing and one of the steps in making the Fledgling involves a second rinse of grain, utilizing all the sugars from the grains for the batch of beer. “We’re getting every bit of sugar out of our grain for this beer,” she said. “It’s definitely a lower alcohol beer. It still has a lot of flavor. It’s just refreshing, clean. The hops they use are Triumph and there are a lot of citrus and lime coming out of that hop.”

Duncan Macfarlane, the Head Brewer, says that they still went through their usual process in brewing the Fledgling just like they did with their other beers. The Phoenix has two brewing systems, a production system that’s next door and a pilot system that is below the restaurant.

“Since we’re making larger production batches next door on a larger scale, we did a second batch out of the grain into smaller vessels or making smaller batches of a second beer. It’s cost-effective and it also made sense to make a lighter beer,” said Duncan. “It’s something people have been asking for, to have a light option. We have lighter options but not as many, so this will add. I know there are other breweries doing 2% beers. I don’t know if they’re doing it the same way. It turned out really well taste-wise.”

One of the quality aspects of The Fledgling table beer that Carmone described was that low ABV table beers go well with meals compared to heavier beers. “They’re super easy to pair with a meal and weren’t supposed to make the person feel overly full,” Carmone said. “Table beers are meant to not make you feel full.”

The Phoenix has plans for more lower ABV beers as well.

“We do have some other ABV beers that will be coming out,” Carmone said. “I can say that one of the beers coming out in our schedule is a hazy pale ale, which will be in the 5% range. It’s a little lighter typically as far as the amount of alcohol and it still has a nice hop profile but not overly bitter. There’s also a beer we brewed last year called the Carousel, which I want to say is a 5½ percent beer. The hazy pale ale is one we’re really excited about.”

Duncan then dived into what customers can expect when they taste The Fledgling.

“Maybe people will be surprised by the amount of flavor in it,” he said. “It’s refreshing, has some good citrus flavors. It doesn’t taste watered-down. It has a bit of body to it, which is nice.”

10 Unique Things To Do In Tucson