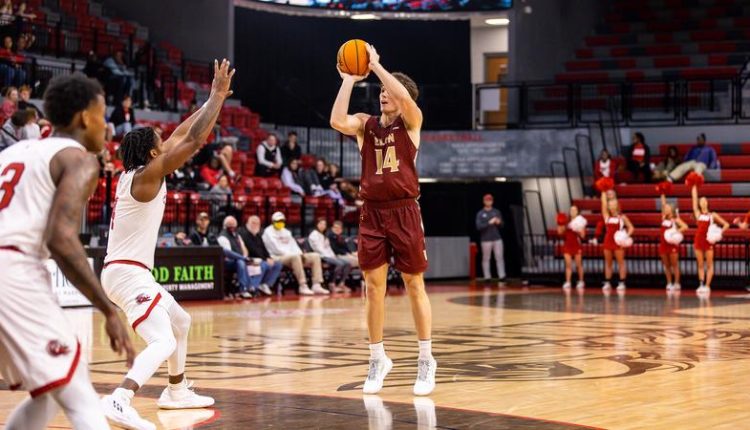 Phoenix Closes Out Road Swing With Setback at Jacksonville State

JACKSONVILLE, Ala. – A run late in the first that extended into the start of the second by Jacksonville State erased early momentum from the Elon University men’s basketball team as the Phoenix fell on the road, 78-53, to the Gamecocks on Tuesday evening, Nov. 22, at Pete Matthews Coliseum.

Elon (1-5) was led by Zac Ervin, who posted a season-best 16 points while knocking down four three-pointers. Sean Halloran joined him in double figures for the Phoenix with 14 points on 4-of-7 shooting.

• The Phoenix jumped out to a 9-5 lead by the under-16 media timeout in the opening half. Three-pointers from Max Mackinnon and Zac Ervin along with another three points on a jumper and a free throw by Torrence Watson gave Elon the early advantage.
• The Gamecocks closed the gap to 9-8 at the 15:53 ​​mark, but Elon countered with a 10-4 run. Sean Halloran knocked down a couple of treys including one at the 12:08 mark that gave Elon its largest lead of the game at that point, 19-12.
• Jacksonville State answered with a 12-3 run to take its first lead of the game, 24-22, capped off by a Clarence Jackson layup with 6:52 left in the first period that led to a Phoenix timeout.
• Elon fought back to make it a one-point game, 30-29, after a three-pointer by Watson with 2:36 left in the half, but JSU went on a 9-0 run to take a 39-29 lead going into the locker room.
• Three three-pointers after the half by the Gamecocks expanded their lead to 45-29 forcing the Phoenix to call a quick timeout less than two minutes into the second period. Another triple by Jacksonville State continued its 18-0 run from the final minutes of the first half making the score 52-29 by the under-16 media timeout.
• The Gamecocks kept building their lead over the next four minutes, holding a 24-point advantage, 60-36, by the under-12 media timeout.
• The Phoenix would not get any closer as the Gamecocks took control of the game for the remainder of the half to take the convincing victory.

• The Phoenix fell to 0-2 all-time versus the Gamecocks in their first meeting since last year’s 93-81 shootout at Elon.
• Ervin’s 16 points gave him his second double-digit scoring outing in his past three games. His four triples were also a season-best for the Gate City, Va., native.
• Elon’s nine threes in the game were also a season-high for the team this season. Halloran was 3-of-4 from behind the arc, his second game with three or more triples out of his past three games.

The Phoenix returns home to host Radford after the Thanksgiving break on Sunday, Nov. 27, at Schar Center. Tip off is set for 2 pm

Phoenix Wright Represents an Ideal to Strive For