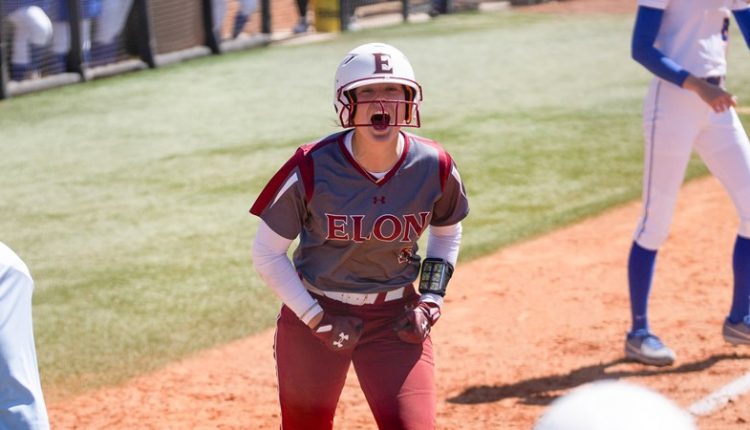 The victory was Elon’s (23-18, 6-6 CAA) first series sweep of the season and its second straight overall league victory. The Dragons fell to 20-15 on the year and moved to 4-8 in the league standings.

• Elon only had four hits in the game with two of those coming from the bat of Rebecca Murray, who went 2-for-4 for her 14th multi-hit game of the season. Murray also legged out a triple in the contest, her second of the season.
• Chloe Hatzopoulos was 1-for-3 while adding her second home run of the series. She also drove in a pair of runs. Drew Menscer recorded Elon’s lone other hit of the game while also drawing a pair of walks.

• Alexa Nemeth got the win in relief to move to 7-2 overall on the year. The Mooresville, NC, native pitched 2.2 innings as the third pitcher used in the game for the Phoenix and allowed no earned runs with a strikeout.
• McKenna McCard pitched a team-high 3.1 innings and struck out three batters while only giving up one hit.

• Drexel put up a three-spot in the top of the first. The Dragons scored off a pair of RBI singles and a groundout to move ahead 3-0.
• Elon loaded the bases in the bottom of the third for a chance to respond. The Phoenix had a runner reach on a fielding error before she was joined on the bases on a Murray single and a walk to Carley Davis with two outs. The bags were left full as a groundout to third allowed the Dragons to escape the jam.
•The Phoenix finally responded with a fifth-inning rally to take the lead. Megan Grant led off on a hit-by-pitch before she advanced to second on a wild pitch. Menscer moved her to third before stealing second to move both runners into scoring position. Murray then lined a triple into right field, scoring both Grant and Menscer to put the Phoenix on the scoreboard with the tying run at third.
• Elon knotted the game at three-all as Davis lined a sacrifice bunt to the pitcher, but the Drexel could not record the out at home as Murray charged from third to tie the game with Davis safe at first. The Phoenix quickly broke the tie on the next at bat as Hatzopoulos blasted a two-run home run to left to put Elon ahead 5-3.
• The Dragons looked to answer with a rally of its own to cut into Elon’s lead in the top of the seventh. Drexel had his leadoff hitter reach on a hit-by-pitch before moving to second with one out on a passed ball. A ground out advanced her to third before she scored on an RBI single to make it a one-run game with the tying run at first. Nemeth however induced the final out on a grounder to herself as the Phoenix closed out the weekend with a 5-4 victory.

• Elon head coach Kathy Bocock reached 267 career wins at Elon, one win shy of tying Sue Leonard (1990-98) for second on the program’s all-time career wins list.
• The Phoenix improved to 18-2 all-time versus Drexel and moved to 9-0 against its league rival in Elon.
• Nemeth’s win gave her a decision in each of the Phoenix’s contests this weekend. The graduate student earned the save in the series opener before being credited with the win in the final two games.
• Hatzopolous ended the series batting .444 (4-for-9) with two home runs, four RBI while also having a 1,111 slugging percentage.
• McCard went 1-0 on the weekend with a 0.91 ERA while striking out 10 batters in just 7.2 innings of action.

Elon begins a six-game road swing next weekend, April 23-24, traveling to Towson for its second CAA road series of the season.

Summer Activity Guide from Yuma Parks and Rec is Online