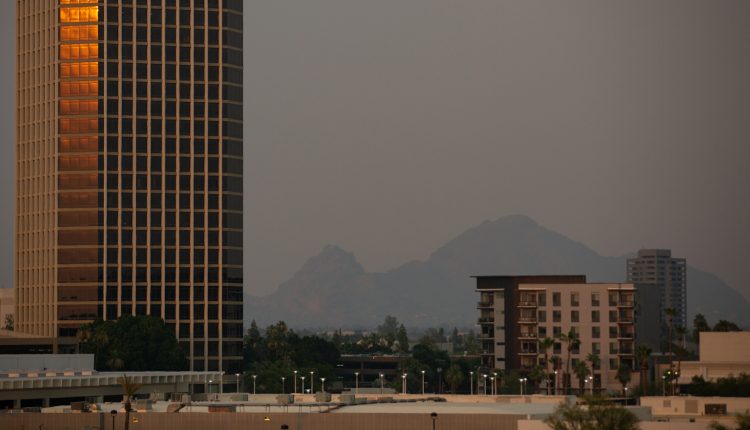 This story was originally published by The Guardian and is reproduced here as part of the Climate Desk collaboration.

Extreme heat contributed to as many as 450 deaths in the Phoenix area this summer, in what could be the deadliest year on record for the desert city in Arizona.

The medical examiner for Maricopa county, which includes Phoenix, has so far confirmed 284 heat-related deaths, while investigations into 169 more suspected heat fatalities are ongoing. The highest number of deaths – and emergency hospital visits – coincided with the hottest days and nights.

The temperature hit 110 degrees F or higher on 22 days this year, yet it was only the 20th hottest summer on record, according to the National Weather Service. It did not drop below 80 degrees Fahrenheit on 75 percent of nights between June and August. Heat effects are cumulative and the body cannot begin to recover until the temperature drops below 80 degrees F.

Overall, the suspected heat death toll is 36 percent higher than for the same period last year, despite a good rainy season which helped keep temperatures – and heat deaths – down from late July. And while heat will be ruled out in some cases, 2022 totals look to surpass last year’s historic high.

“Deaths tend to increase during our hottest days, especially when combined with very warm nights,” said Marvin Percha, a meteorologist with the National Weather Service Phoenix. “The long-term increase in summertime temps seems to be playing at least some role in the increasing number of heat deaths over the years.”

Phoenix, the capital of Arizona and the country’s fifth-largest city, with 1.6 million people, is accustomed to a hot desert climate, but temperatures are rising due to global heating and urban development, which has created a sprawling asphalt and concrete heat island that traps heat especially at night.

Heat deaths are preventable, yet have doubled since 2016, and it’s not just down to the heat.

Phoenix is ​​also one of the fastest growing and most expensive cities in the US, with a crippling shortage of affordable housing and a rapidly growing homeless population.

According to the county’s annual count, there were 5,029 people sleeping on the streets in January – triple the number of unsheltered people compared with 2016. Being outside without adequate shade and water increases the risk of medical complications and deadly heat exposure.

Despite several new shelters opening this year, the situation has gotten even worse. Across the city, there are men and women sleeping rough in parks, parking lots and shop doorways, and behind dumpsters, and along canals.

Last week, outreach workers counted 1,006 people sleeping in tents, under makeshift shelters or on the ground in just one relatively compact downtown area known as the zone, where many of the city’s shelters and homeless services are concentrated. On very hot days the temperature can reach 160 degrees F on the asphalt where people are camped.

Eviction rates in Maricopa county are higher than pre-pandemic levels, and inflation hit 13 percent in Phoenix last month – a record for any US city according to data going back 20 years. One in five confirmed heat deaths this year occurred indoors, and initial reports suggest the soaring cost of living may have played a role as 80 percent of victims did not have functioning air conditioning.

Still, this year’s high death toll is alarming given the cooling seasonal rains and the city’s first coordinated effort to reduce heat deaths, which involved more than a dozen agencies in addition to a gaggle of nonprofits and grassroots activists.

“It’s not just about heat, it’s a multifactorial problem that requires more coordination and creativity to line up the different pieces of the solutions portfolio,” said David Hondula, who leads the city’s – and North America’s – first extreme heat office. “Messaging alone won’t help, nor will handing out water bottles or investing in housing alone.”

Tackling the complex and interconnected issues that increase the risk of heat emergencies – lack of affordable housing, homelessness, substance misuse, inflation, inadequate shade, and rising temperatures – will take time, money and political will.

In the meantime, Hondula’s heat team will be diving into the data from 2022 to figure out which services or interventions saved lives and should be expanded, and which should be reformed or scrapped.

Hondula added: “This is not where we want to be; our goal is zero deaths.”

BMI: The Mismeasure of Weight and the Mistreatment of Obesity