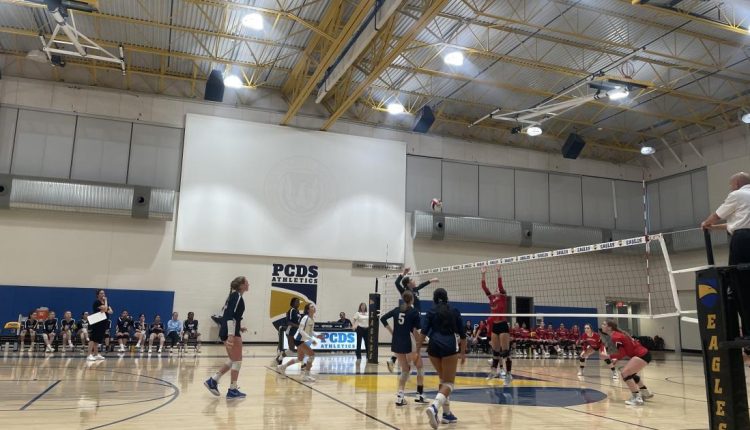 Junior middle blocker Emma Lammerson goes in for a spike.

The Eagles quickly showed dominance in the first set at Najafi Gymnasium, winning thirteen points in a row, ultimately taking the set 25-7.

PCDS consecutively won the second and third sets, 25-13 and 25-21, coming out victorious on their home turf.

Head coach Kat Glaeseman said her team was able to find a level of control in the game.

“I think we have girls who really work hard and want to do their best. There’s no motivation issues. Everyone’s trying their best and working hard every day,” Glaeseman said.

The freshmen duo of outside hitter Asia Harper and setter Josie Robinson were both standouts in Thursday’s game.

“When we were going into the season, I was a libero, but then the coach told me I was going to be an outside, so it was kind of challenging for me to take on a new position. But, when I saw the team during tryouts, I knew that I could do this, and I could try new things. Everyone was just so welcoming,” Harper said.

Robinson emphasized just how full circle this season has been, as she’s filling the shoes of her older sister and PCDS alumna, Lilly.

“My older sister, Lilly, also started as a freshman, and she was a setter as well. I always looked up to her and knowing that when she graduated that I immediately got to try out to be the setter on varsity was amazing. It felt like I was just like her. She’s helped me with everything that I do, and it’s so exciting for me,” Robinson said.

Glaeseman said the youth on her team show how much potential is in the future of the varsity squad.

“I think where we trip up is that we’re young, we’re still trying to figure each other out. We’re a brand new team to each other. So, there’s definitely a lot of growth potential because the desire is there. A majority of the starters are underclassmen, so I think we’re still trying to figure that out. We’re hoping that some people step up in some ways and others step up in other ways. It’s been a big growth year for us,” Glaeseman said.

Phoenix Country Day’s annual Blue and Gold weekend, starting Oct. 21, celebrates the fall athletics and acts as the school’s homecoming. The girls’ varsity volleyball team is front and center during this tradition as it plays their rival, Rancho Solano Prep.

It’s a weekend on the calendar that has PCD’s young players excited.

“I think it’ll be really fun. Afterwards, we’re gonna have this big carnival. We’re playing a really good team, so I think we’re all just gonna pour our hearts out,” Harper said.

“Everyone comes out to support, even if they don’t like volleyball. It’s the one day a year where everyone just comes together, and I’m so happy that Asia gets to experience it,” Robinson said.