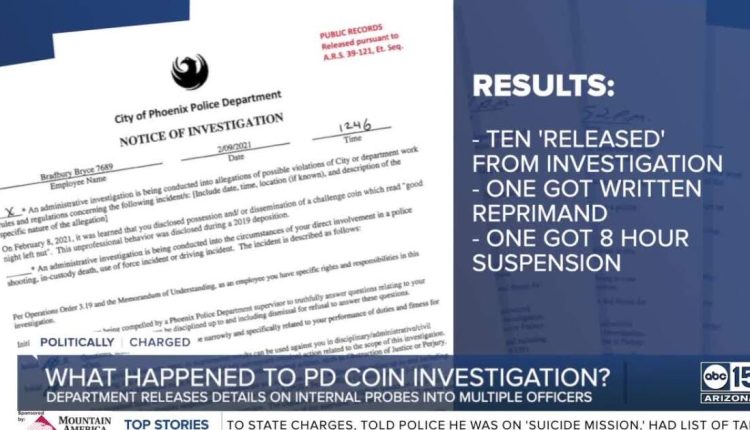 The hate-speech-inspired coin featured a cartoon image of a protester who was hit in the groin.

Officials also confirmed a previous ABC15 investigation that exposed video of the shot depicted on the coin was shown to police recruits at the academy.

The coin was created in the days after a protest in August 2017.

But its existence was not publicly known until an ABC15 report in February 2021. After, the city hired a law firm to conduct an outside investigation and launched a series of internal investigations.

Thirteen officers were given “notices of investigation” (NOIs) for the internal probes.

At the time, Phoenix police declined to name the officers who were under internal investigation. So, ABC15 filed a public records request for the NOIs in March 2021.

Internal investigations and corresponding records are confidential under state law until those cases are concluded. In a series of emails over the past week, department spokespersons confirmed that the majority of those initially placed under investigation were “released from the NOIs.”

A third officer was also given a written reprimand related to video shown at the Phoenix Regional Police Academy.

The department did not respond to follow-up requests for that officer’s name.

Insiders previously told ABC15 that the coin’s image and video of the shot it celebrated was shown to recruits at the academy in early 2018.

“(It was) very celebratory,” said one source who was present. “Recruits are kind of molded, which is why I think it was a bit of an issue… It was not only a justified use of force but a celebrated use of force. Something to look up to.”

The outside investigation by Ballard Spahr, which was the law firm hired by Phoenix, discovered additional memorabilia was created with the same image, including shirts and hats, which were available in a box in Phoenix’s downtown station.

But Ballard Spahr’s final report did not include any details about the image being shown to an academy class. Internal and outside investigators did not have access to certain records or data due to challenges from officers and police union, records show.

The challenge coin is part of a major scandal for the Phoenix Police Department, which is under the Department of Justice pattern or investigation practice.

In 2019, outgoing Chief Jeri Williams was privately questioned about the coin and shown images during a deposition, but she did not act on the information.

The chief’s action was reported as part of broader reporting about Phoenix’s abuse of protesters in recent years. ABC15’s investigation discovered that city officers colluded with county prosecutors to invent a fictional gang and falsely charge protesters as members.

Some of the same officers who possessed the coin and bragged about the image were involved in the case of the protesters falsely charged as gang members.