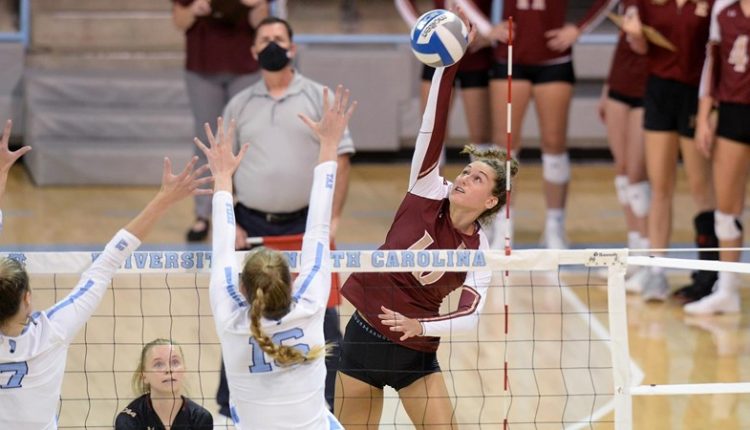 “We took to the streets and competed against a very good, top-ranked UNC team from the start,” said head coach Mary Tendler. “We put ourselves in a position to win that first set but didn’t make it. I like the way we fought in the second set even though we were behind.”

Elon 0, North Carolina 3 (23-25, 17-25, 8-25)
THE RUNDOWN
The opening set was tight from start to finish as Haylie Clark assisted Sydney Love before a UNC offensive mistake knotted the score at 5-5. Two kills by Leah Daniel underscored a 4-0 run that put the Phoenix (5: 5) in the lead with 10-7. Elon then benefited from several attack errors and bad sets by the Tar Heels (9-0), as five unanswered points increased the lead to 18-12. However, the hosts fought back to tie the set at 20:20. Jenn Krzeminski set Kellyn Trowse one set away for another tie at 23:23, but Carolina took the next two points to secure the 25:23 decision.

An early 4-1 run in the second set, highlighted by two kills from Love, put the Maroon and Gold in control at 7-6. However, UNC would respond with an 8-1 swing. Another kill from Daniel and a block from Clark and Natalie Cummins helped the Phoenix close the gap at 24-17, but UNC won the set point to lead the 2-0 match.

Elon couldn’t stop the Tar Heel offensive in the third set and quickly fell 9-1 behind. An 8-0 UNC run then pushed the hosts’ lead to 19-3. Love scored two late kills and Krzeminski added another, but an equalizer 25-8 ended the match.

HIGHLIGHTS
Daniel led the maroon and gold with 12 kills and Love followed with eight. Clark continued her streak of double-digit digging games, finishing it at 24. The senior captain also recorded two blocks while Krzeminski and Cummins collected one each. Trowse led the back row with eight digs, and Jordan Gower followed with four.

“We learned a lot and were tested in the non-conference game,” added Tendler. “We’re ready to start the CAA game this weekend.”

NEXT
Elon opens conference games on the street as the team heads to Charleston, SC for two games against the College of Charleston Cougars (7-4) on Friday and Saturday, September 17-18.