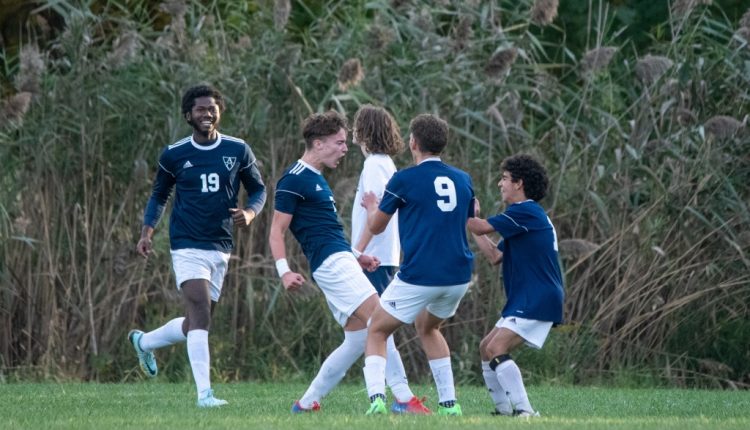 Phoenix hang on by talons for big result, 2-1 – News-Herald

Inigo Focinos Gutierrez was one of many in a senior shop side who were part of a quaint senior afternoon sendoff Oct. 13 as Andrews Osborne welcomed Wickliffe.

The Madrid native carried the festivities to the pitch as well.

The senior striker logged the eventual match-winner past the hour mark, and the Phoenix survived two late goal-line clearances by the edges of their talons with a 2-1 win over a strong Blue Devils’ side.

#NHsoccer @AOA_Athletics’ Sergio Grano De Oro discusses his side’s 2-1 win over Wickliffe
Assisted on both goals & had a vital goal-line clearance late – sophomore had himself a nice match suffice it to say
(Match story will be tweeted in a few minutes) pic.twitter.com/7iklyhkNQl

For a side in AOA (6-4-2) that has had some difficulty this fall finding traction, taking down Wickliffe, which came in 13-3, could be the spark the Phoenix needed.

“I think this is extraordinarily important,” AOA coach Drago Dumbovic said. “This was the best game that we’ve played, with such intensity. They’re a really good team. It was a well-fought game. But we need that. We need this kind of intense finish, because in the playoffs, that’s going to be about every game. The kids really pulled out a good win.”

As solid as the attack was with 13 shots on target for the Phoenix, coming off a Division III regional appearance a year ago, they needed to dig deep in the defensive third for the result.

Without a scoreboard, the match times are approximate. But the last five minutes assuredly felt like 50 for the hosts as the Blue Devils (13-4) came agonizingly close to an equalizer.

First it was Colin Casey swinging a corner into the box far post for Kevin Byrne, who put a header on frame.

But AOA sophomore Sergio Grano De Oro, who had earlier assisted on both his side’s goals, came up with the play of the match with a goal-line clearance. Then in the final seconds, AJ Levon had a strike off a corner, again barely cleared off the line as the full-time whistle blew.

Video recorded by The News-Herald and later viewed frame-by-frame showed both calls of no goal were spot on.

“I was just watching it and enjoying it, because that is one of the big parts of the game that is so beautiful,” Dumbovic said. “Everything being intense, they did really, really well.”

After a scoreless opening 40, the Phoenix took the lead in approximately the 47th minute. Grano De Oro served for Giancarlo Toirac, who slotted a strike wide left to go up, 1-0.

That was canceled out by what may wind up as the goal of the season in The News-Herald coverage area.

On a scramble in the box, Casey tried his luck with a bicycle kick and hammered it on target and home upper-90 in approximately the 57th to level matters, 1-1.

Wickliffe’s Colin Casey goes for a bicycle kick and scores a goal off it during the second half Oct. 13 at Andrews Osborne. (Paul DiCicco – for The News-Herald)

“That’s probably his third attempt this year, but that one looked the best and he looked at me and laughed,” Wickliffe coach Dominik Severino said. “I’m not going to take that away from him. That’s one of the best goals I’ve ever seen. That was a fun one, and it’ll be exciting to go back and watch the film.”

Gutierrez delivered the match winner in about the 69th. Grano De Oro played with diagonal intent into the box, served for Gutierrez and the senior took care of the finish from the left side of the box for the final margin.

“That was a pretty good goal,” Gutierrez said. “I kicked it with my left. I liked it. I almost had a heart attack (with the two goal-line clearances). It was crazy, yeah.

“It was a really good game that’s going to help us a lot going into playoffs to get us into the mindset. All the games are going to be like this going into playoffs. It’s good practice, I think, for playoffs, and I’ I’m really happy with the victory.”

#NHsoccer My post-match analysis of AOA’s 2-1 win over Wickliffe pic.twitter.com/efBwzTbvNC

Trump to be subpoenaed by Jan. 6 panel as the ‘central cause’ of Capitol insurrection