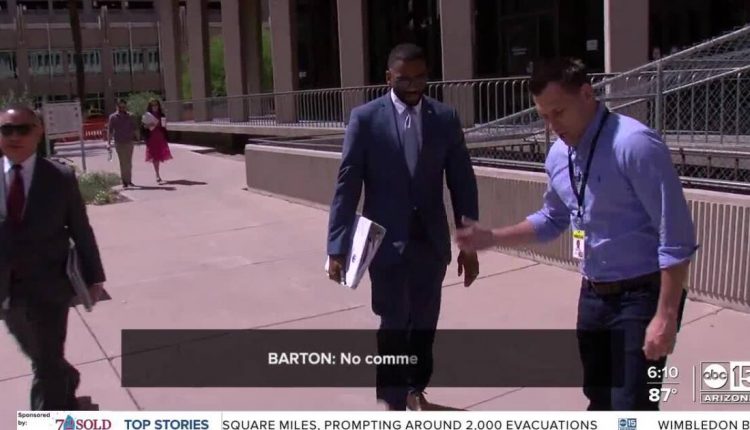 PHOENIX — City Manager Jeff Barton declined to answer questions on Wednesday about a series of secret recordings that reveal Phoenix top cops saying the police chief misled the public and city council about their knowledge of a case involving falsely-charged protesters.

ABC15 reporters approached Barton and multiple city councilmembers outside the council chambers ahead of a regularly scheduled public meeting.

“It’s all awful. I think we need to take it seriously. I’ve asked for a policy meeting,” Garcia said. “The time is now. The mayor and the city manager need to step up to these questions and answer for what’s been happening.”

When approached outside the meeting, Barton told an ABC15 reporter “no comment” before a question was asked. He continued, “The City of Phoenix does not litigate in the public forum.”

On Monday, three former Phoenix assistant chiefs filed a lawsuit alleging that Williams and the city unfairly blamed, scapegoated, and demoted them following an outside investigation conducted by a law firm into the bogus gang charges.

The outside probe was launched because of ABC15’s “Politically Charged” investigation, which exposed how police and prosecutors colluded to invent a fake gang and then charge protesters as members.

Williams claimed that she was not informed of the decision and remained unaware.

“The boss herself knew about this for months. We didn’t hide it,” Kurtenbach said in a recorded conversation on August 13, 2021.

Councilmember Ann O’Brien ignored an ABC15 reporter who asked if she was worried that Williams misled the council and the public. Councilman Jim Waring said he had not seen ABC15’s news reports.

Council member Laura Pastor, who has recently asked for more public hearings about the protest scandal, said information was going to come out in an investigation.

“That’s all going to come out in our investigation,” she said.

Pastor did not clarify what investigation she was talking about. The law firm’s outside rehearsal was completed in August. There is currently an ongoing Department of Justice pattern of practice investigation.

Williams, Mayor Kate Gallego, and other top city leaders have continued to decline comment on the recordings, citing the litigation facing the city.

ABC15 asked Garcia if Williams was still fit to run the department.

“I think that’s a decision (Barton) has to make,” he said. “That’s his first big decision. And we’re waiting to see what happens. I think we need to have a public discourse to make sure the community has input on the decision.”