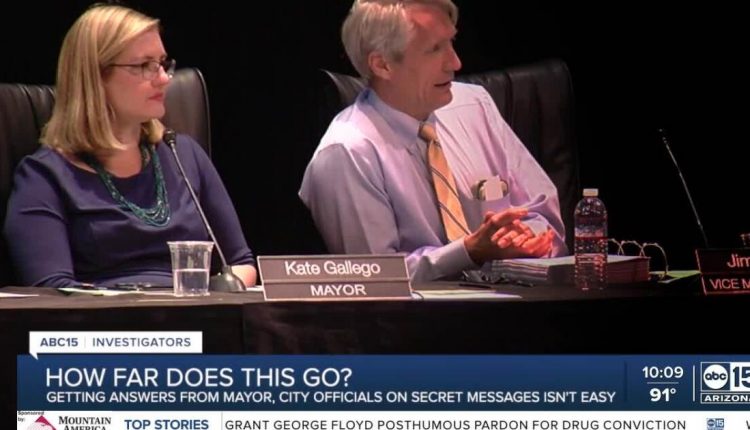 PHOENIX — It was more than a month ago that ABC15 exposed outgoing Phoenix Police Chief Jeri Williams and her top brass had used the secret messaging app Signal to discuss sensitive department matters.

In wake of the reports, other top Phoenix leaders have remained silent on the issue and did not respond to emailed questions asking if they or their staff members used similar encrypted messaging apps to conduct city business.

The city has not yet produced any documents, in response to an official records request filed by ABC15 on August 25 seeking any and all messages that were sent and/or received on the apps by specific Phoenix leaders.

When asked for an update this week, a spokesperson said they have no estimate for when the request would be completed.

Getting information and records from the City of Phoenix and its leaders on controversial topics is often difficult.

Below is a timeline of what it took to get Gallego and her staff to admit to using the app.

ABC15 sent the Phoenix Police Department executive team, City Manager’s Office, and Mayor and Council offices emails telling them to preserve their messages and asking for the names of employees who use Signal.

The Mayor’s communication director, Jeanine L’Ecueyer, responded, “Dave, I do not use Signal. I am unaware of any staff member in the Mayor’s office who does.”

CILETTI: It’s also been reported that there might be some other widespread of Signal with the city. Do you know of any other offices who have used Signal or has your office used Signal?

Instead, Gallego looked to someone off-camera. L’Ecuyer then can be heard saying, “Nick, why don’t you call me?”

The mayor then answers without directly addressing the question.

“We are fully committed to complying with public records laws and taking it very seriously,” Gallego said.

After an event with the Hispanic Chamber of Commerce, ABC15 investigative reporter Melissa Blasius approached Gallego to ask her about her office’s signal use.

A spokesperson told Blasius that the Mayor would answer just one question:

GALLEGO: Are you actually going to cover the Hispanic chamber?

BLASIUS: Yes we are. And we livestreamed everything back to our station. So yes, we are absolutely going to cover this tonight. But what I want to ask you is have you ever communicated with any city employees, elected officials from the city, or discussed city business at all using the Signal app?

GALLEGO: I did have signal on my phone. I was advised a year ago that I should remove it. I miss now communicating with groups of friends from college who use Signal. But the advice from my team was it would be better not to have it.

BLASIUS: Did you preserve the signal message app messages you made with other government officials in accordance with public records law?

GALLEGO: I do my best to follow public records law. I try my very best to do so. Thank you very much.

The Mayor’s Office released the following statement about their signal use:

Members of this office used the Signal app in the past. When we became aware of use of the app may not have been compliant with the Arizona Public Records Law, we ceased using it. Among other things, the app was used for interoffice conversations and communication with friends. There is a group of women elected officials who shared social updates on Signal in which the Mayor participated. Some members of our team used signal to participate in parent groups. We were in error when we did not retain messages generated by the app. Use of the app did not result in any violations of the Arizona Open Meetings Law. At no point in time was there intent to avoid the Arizona Public Records Law. This office constantly strives to comply with city policies and state law involving public records.”