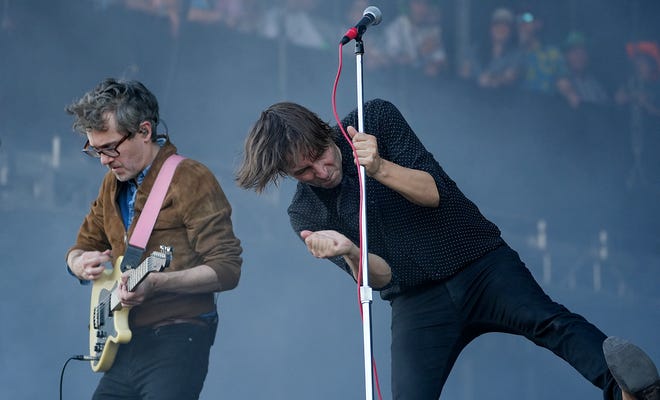 Phoenix loves Austin, and they proved it at ACL Fest Weekend 2

The members of Phoenix have forged a seemingly insoluble bond, from music-obsessed French teenagers growing up together in Versailles to a dance-rock band with a deep discography of their own.

And the amount of times I’ve seen Phoenix, well… not saying I get invited to their Christmas parties or anything, but I do feel a certain bond.

I’m not the type to keep a detailed diary of every show I go to (probably should), but I do remember the band’s 2013 stop at Austin City Limits Music Festival, which included a surprise show at Anderson High School between weekends, as being The Year I Saw Phoenix More Than You’re Supposed To — at least three. There have been a couple other dates with Thomas Mars and co. in there, including another ACL fixed set.

Phoenix guitarist Christian Mazzalai told us backstage before the show when we brought up the Anderson show: “For us French guys, we saw so many American movies when we were teenagers (that featured) these kinds of schools, you know. They’re very different from our schools. It was nice to see them in reality.”

Anderson High School was one of the strangest places they’ve played, the brothers told me, but a show at a Berlin swimming pool is also up there.

On Friday, Phoenix returned to ACL Fest for a feel-good show (with no gymnasium bleachers) on the Honda stage for Weekend 2.

Smiles erupted from the stage and from the packed crowd from the opening trill of “Lisztomania” and never let up. The album “Wolfgang Amadeus Phoenix” from 2009 is a giant of millennial indie rock, one of those records from the 2000s that’s easy to take for granted because it’s become a sonic fixture of our lives, from car commercials to movie soundtracks.

More:Conan Gray’s a Georgetown kid. Austin should claim this prince of pop.

But shake yourself free from the complacency of having lived longer than the era of “Avatar,” skinny jeans and the Obama administration. These songs go hard: “Lasso,” “Girlfriend” and “Rome” still feel like the epitome of cool, rock for people who love Giorgio Moroder, dollar beers and their New Yorker canvas tote in equal measure. Mars sings, “‘Til you know me well” on “Girlfriend,” and I can’t help but think, “Oh, I do not remember a single one of my friends’ phone numbers, but I know these songs like I was given the CD in utero.”

Even though “Wolfgang Amadeus Phoenix” cuts ruled the audience on Friday, the satellite tracks of the Phoenix universe kept the windmills turning in a jam-packed set, especially “Entertainment” and “Trying to Be Cool” from 2013’s “Bankrupt!” On the latter, Mars brought out a pair of fancy binoculars that seemed to project his telescoping view onto the big screens.

The connection is real.

“I want to bond with you, but I don’t have time,” Mars said from the stage in a brief snippet of crowd banter. As he explained, Phoenix has a lot of material to get through, so they try to keep it focused on the music.

The first time the band ever played for a huge crowd was at ACL Fest 2009, he said, so the festival holds a special place for Phoenix, and it keeps them coming back. (I can corroborate that last part.)

The band’s symbiotic relationship to the fans came out best for “1901” at the end of the show. You know this one; it’s from the Cadillac ads. In the war of art and commerce, art won out Friday, and Phoenix wrestled “1901” away from its luxury automobile associations and returned it to its place as a barn-burner fit for a festival. As usual, Mars ended up lying prone on the stage, before venturing out into the pit.

The banter’s light, but the vibes are immaculate.

That kind of artist-fan connection seems to flow naturally out of the band’s own love for each other.

“If we weren’t friends, we couldn’t have done it for so long,” Brancowitz told me backstage before the show. “Imagine holidays — when you’re with your best friends, all the bad moments, they become great memories.”

One more Phoenix-in-Austin in the books, and I wouldn’t be surprised if there were many more to come. As Brancowitz and Mazzalai told me, the band appreciated Austin’s weirdness.

“We’ve traveled in America for a long time now, and we witness (that) it’s becoming more and more corporate and similar,” Brancowitz said. “So places like Austin that are unique and you see individuality, for us, it’s a great message to the world.”