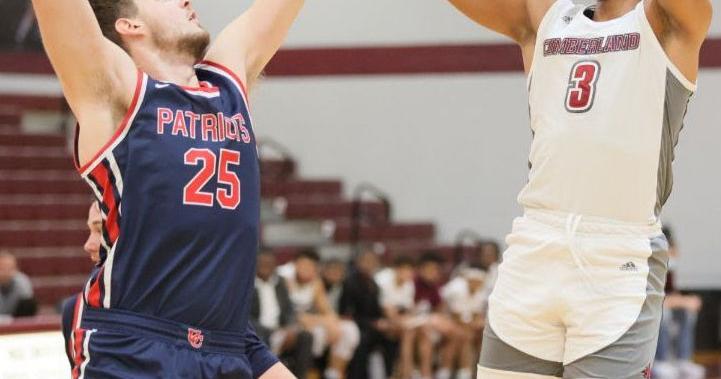 The Cumberland men held off a late University of the Cumberlands surge to win 71-63 at the Dallas Floyd Phoenix Arena last Saturday night.

The Phoenix (9-4, 5-4 Mid-South Conference) shot the ball efficiently at 46.4% off the field but still fought beyond the arc, making 5 of 18 three-pointers. They controlled the boards and amassed 38 rebounds, seven more than the Cumberlands.

Tyler Byrd had 12 points off the bench in just 23 minutes and Tavon King had 10 points for his 12th double-digit game this season.

The Cumberlands (12-6, 6-4 MSC) went out on 22 of 55 and made eight three-pointers. Steven Fitzgerald led the Cumberlands with 19 points. Jahi Hinson landed right behind him with 17 points. Lamar Harris had 12 points and five rebounds.

It was back and forth for the first six minutes, with both teams battling for a 12-12 score. The Patriots went 19-16 to a three-point lead before Cumberland took a 7-0 lead. Over the course of the run, Ridley scored five points and Coleman hit a putback to lead 23-19 by 6:59 in the first run.

The Phoenix would take the lead to six at 27-21 before Hinson hit two shots in a row to break the Phoenix lead at 27-25. Ridley scored a last-minute basket and Jordan Stephens laid from coast to coast for a 31-25 half-time score.

Cumberland came out of halftime and put on a fast 10-0 run when Ridley hit two threes and King got a knight to fall for Cumberland’s biggest lead of the game at 41-25.

The Phoenix maintained their 10-point lead through the eight-minute mark when JJ Ramey scored a three for the Patriots to spark a 7-0 run and cut to 60-55.

The Patriots would take it down to 64-62 after a barrage of free throws from both sides, but Cumberland reinforced in the closing minutes, getting stops when needed to hold on to the 71-63 win.

The Phoenix will head out on Thursday to take on NAIA champion Shawnee State in Portsmouth, Ohio. Tipoff is scheduled for 7:00 p.m. CST.