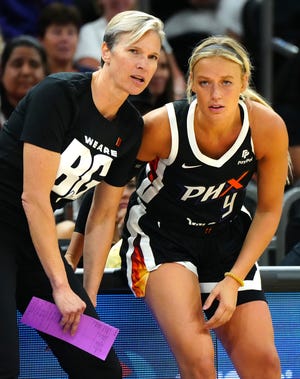 Kayla McBride was 9 of 9 from the free throw line and finished with 17 points for Minnesota (9-15). Sylvia Fowles had 14 points and 14 rebounds, and Jessica Shepard added 13 points, 12 rebounds and two steals.

McBride made two free throws to give the Lynx a 103-101 lead with 2.1 seconds left in the first overtime. After a timeout, Skylar Diggins-Smith made a driving layup to force a second OT.

Powers made a layup and Banham hit her sixth and final 3-pointer to make it 108-103 with 3:37 to play as Minnesota finally pulled away.

Taurasi, who shot 5 of 17 from behind the arc and 5 of 23 overall, drove to the basket and initiated contact with Fowles, then attempted a fadeaway as she kicked her right leg into Fowles’ midsection. No foul was called but, after Powers secured the rebound, the Lynx called a timeout with Fowles in obvious pain and 33 seconds to play.

Powers muscled her way into the lane for a layup and Banham made a free throw to give the Lynx an 89-86 lead, but Cunningham hit a second-chance 3 with 4.0 seconds left to force overtime.