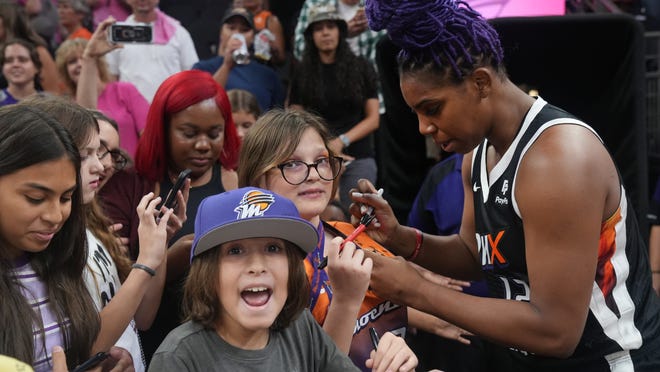 With three games left in the regular season, the Phoenix Mercury slid into the eighth and final WNBA playoff spot following their 76-62 victory over the New York Liberty on Saturday night.

“We know the playoff race is close, and we know that it’s like, a game or half a game at this point, it’s a really tight race,” Diamond DeShields said. “So, we just keep coming out and keep competing. We’re all here to win.”

DeShields had a team-high 25 points on Saturday while the Mercury took the regular season tiebreaker game over the Liberty. With a 2-1 record against New York, Phoenix will make the playoffs in the event of an end-of-season tie between the two teams.

“There is this playoff picture, but there are so many variables,” head coach Vanessa Nygaard said postgame. “We’re happy to get the win tonight, get the tiebreaker over New York, which is a team we could end up potentially tying with. All that stuff was positive for us. But there’s games left to be played. We’ll enjoy this one tonight and then turn our focus to Minnesota.”

The New York Liberty, currently sitting at ninth in the standings, will take on the 5th place Dallas Wings and 7th place Atlanta Dream twice each to end the regular season.

Phoenix finishes out the regular season at the Footprint Center with games against the 10th place Minnesota Lynx, Wings, and 1st place Chicago Sky.

“Our home crowd is a factor,” Nygaard said. “They call them X-Factor because they’re a factor in the game. They give us points, they give us defensive stops.”

The Mercury were also missing two starters on Saturday. Skylar Diggins-Smith was out with a non-COVID illness, while Diana Taurasi was out the past two games with a right quad injury.

Taurasi was downgraded from questionable to out ahead of Saturday’s game, and Nygaard said the guard is day-to-day. But as the playoffs loom, Nygaard said she’s optimistic of Taurasi’s progress.

“I’m not sure,” Nygaard said when asked if Taurasi would’ve played Saturday if it was a playoff game. “But I’m sure that (Taurasi) would say yes to that.”