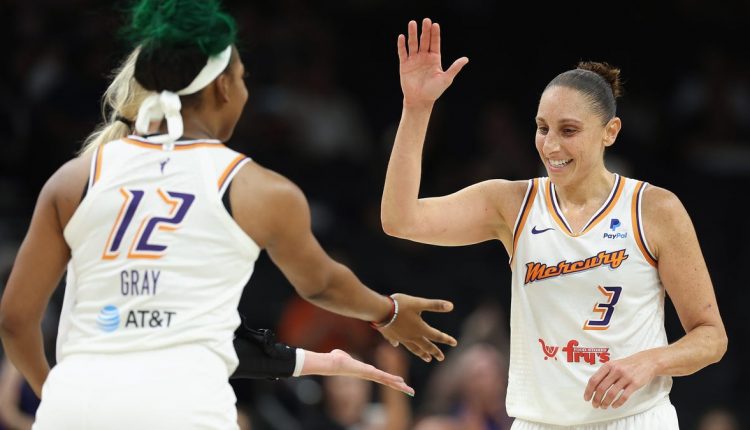 The Phoenix Mercury showed why they’re a second-half team on Thursday night.

The Mercury took the lead in the final eight minutes of the game and never surrendered it again — unlike Tuesday’s double-overtime loss against the Minnesota Lynx.

“Minnesota was a heck of a game, coming off break,” Sophie Cunningham said. “Everyone besides (Skylar Diggins-Smith) hadn’t played in a while, so that one kind of got us going, got us in rhythm, but today I think everyone played so solidly from top to bottom and everyone contributed. And I think we’re just starting to find our rhythm a little bit. Like we’ve always said, we’re a second-half team.”

Not much went right for Phoenix in the first 10 minutes. Phoenix’s first score, a layup by Brianna Turner at the 9:16 mark, was taken back after officials deemed the ball didn’t leave Turner’s hand before the shot clock expired.

Off the bench, Diamond DeShields blocked a Mystic basket near the end of the first quarter. On the next possession, DeShields hit the ground hard, and ended up leaving the game after a comeback attempt in the second quarter. DeShields was on crutches following the game.

“It’s still up in the air,” DeShields said of the severity of her injury. “I’ll probably find out more tomorrow, but I think it’s okay. It was a bad series of events, but I should be fine.”

Despite the lack of offensive power, Diana Taurasi thought the bench contributed physically on Thursday.

“It’s funny, the bench actually came in and gave us a lot of good minutes,” Taurasi said. “I don’t know if it translated to stats, but you know, Jennie came in, Megan came in and brought that physicalness, (Reshanda’s) been great since she got here. So, we did get some good minutes. It just didn’t translate to points.”

The Mercury had to rally from a 15-point deficit after the first quarter. But Taurasi, an 18-year WNBA veteran, gave her teammates encouragement in the huddle. Taurasi led all scorers on Thursday, finishing with 29 points.

And the Mercury took advantage of the long game. By the time the halftime buzzer sounded, Phoenix outscored Washington 32-19 in the second quarter and trailed by just two points, 45-43. The second quarter comeback also included some spiciness, Cunningham said.

Nygaard received a technical foul at the 4:42 mark of the second quarter for arguing with officials. Just a minute later, Cunningham and the Mystics’ Myisha Hines-Allen got into a heated exchange after a Cunningham 3-point attempt, resulting in a double technical.

“It’s nothing,” Cunningham said. “I mean, if that happened with guys, we wouldn’t even be talking about it. But I thought I got fouled, she stepped over me, so why can’t I be a little feisty and sassy?”

Diggins-Smith and the Mystics’ Elena Delle Donne also received a double technical in the fourth quarter, and Cunningham said their argument didn’t warrant a technical foul.

By the end of the game, all Mercury starters played over 34 minutes on Thursday night, with Cunningham only resting for 54 seconds of game time.

“They’re warriors, they’re absolute warriors, they battled in every way,” Nygaard said postgame. “We checked up our defenses a bunch. I wish there were more timeouts to give them more rest, but they constantly battle.”

With DeShields questionable, Phoenix may have only nine players available for its next game against the Atlanta Dream on Sunday at 3 pm

As Big Pharma Loses Interest in New Antibiotics, Infections Are Only Growing Stronger