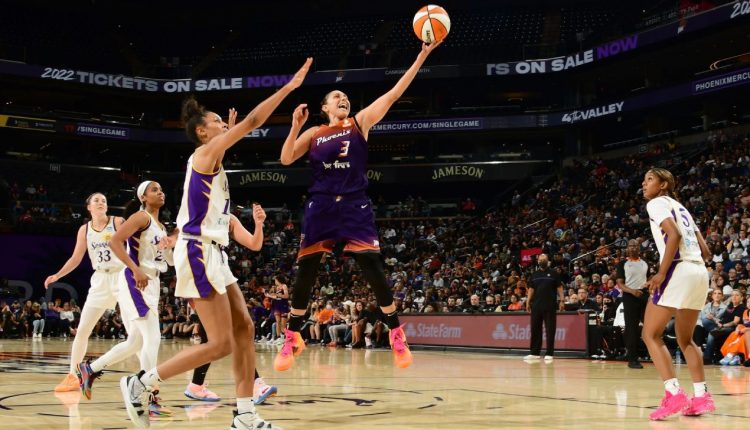 It seems hard to imagine, but Phoenix Mercury star Diana Taurasi found even more rare air to be in Thursday night.

Taurasi scored 30 points in Phoenix’s 90-80 win over the Los Angeles Sparks, becoming the first WNBA player in league history to score 30 or more at age 40 or older. She also joined Michael Jordan and Dirk Nowitzki as only the third to do it in NBA/WNBA history.

“Well, I mean, at this point — we were just talking about it in the hallway — when you’re old, everything’s a record,” Taurasi said. “The first person to miss 15 3s in a game over 40. First person to have four offensive fouls in a two-minute span over 40.

With the win, the Mercury jumped into sixth place in the WNBA standings, putting them squarely in the playoff race. Phoenix has a 76% chance of making the playoffs, according to the WNBA BPI, a rate that could shift overnight but not by much.

Taurasi, who turned 40 on June 11, finished 12-for-20 from the field, including 5-for-13 from 3-point range, and was 11-for-12 from the free throw line. Thursday night was Taurasi’s 27th game with 30 points and five 3-pointers, which is more than all the WNBA franchises have individually. The Minnesota Lynx are closest to 19.

This was her eighth game this season with five or more 3-pointers, the second-most in WNBA history behind the 10 games she did it in in 2006. It was also Taurasi’s 52nd career 30-point game — 20 more than any other player in WNBA history.

Skylar Diggins-Smith had 27 points, six assists and five rebounds before she was ejected with 7:48 left in the game after she received two technicals for arguing a foul call.

“She made me proud,” Taurasi said jokingly before calling Diggins-Smith’s ejection “unfortunate.”

Chennedy Carter led the Sparks with 23 points and Nneka Ogwumike had 11 rebounds.

Phoenix is ​​now 13-16 with seven games left. The Mercury would extend their playoff streak to 10 straight appearances should they hold on to a spot for the postseason.

Go Sipping In Flagstaff, Home To Some Of Arizona’s Best Watering Holes