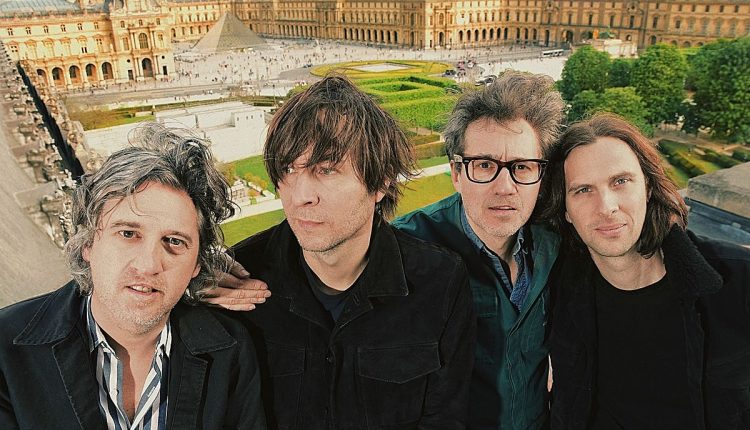 Thursday: Lombardi Live With White Ford Bronco at the Bullpen

Georgetown University’s Lombardi Comprehensive Cancer Center is one of a select group of nationally recognized cancer centers that lead the way in research, treatment, education, and community outreach, and the only such center in greater DC As part of its mission to serve and engage its surrounding community, a group of young professionals known as Friends of Lombardi hosts a series of signature events. This fall, they are giving music lovers a chance to donate to a good cause while rocking out to covers of favorite songs from Shania Twain, Red Hot Chili Peppers, counting crowsand Third eye blind. Beloved all ’90s cover band White Ford Broncowhich consists of DiegoValencia, Gretchen Gustafson, Ken Sigmund, Billy Woodand Sean McCauley, is headlining the Friends of Lombardi’s fourth annual Lombardi Live concert. Billed as a “concert to end cancer,” all proceeds will go toward efforts to prevent, treat, and cure cancer. Concertgoers will jam out at the bullpen and VIP ticketholders will also get exclusive access to dinner from Buffalo & Bergen. If you’re looking to maximize your impact, Friends of Lombardi is also offering a variety of sponsorship opportunities ranging from $500 to $10,000 ahead of the concert. The event starts at 5 pm on Sept. 15 at the Bullpen, 1201 Half St. SE. friends.lombardi.georgetown.edu. $25-$50. — Sarah Smith

Friday: Phoenix at the Anthem

During a recent interview with Phoenix‘s Thomas Mars, the lead singer referred to the band’s upcoming release Alpha Zulu as “the art album” for good reason; the French indie quartet created the new music in a recording studio built in the Louvre Museum. “We moved in just before the pandemic,” Mars tells City Paper. “So we had the museum for ourselves and at night, during the day it was really surreal and it was very inspiring.” That inspiration can be seen and heard when the band returns for a show at the Anthem on Sept. 16. In the music video for “Alpha Zulu,” the first single from the album, various paintings and sculptures come to life lip-syncing along to the song in a playful manner. In reality, the track was inspired by a much more dramatic event—a turbulent flight, which—for Mars, already an uneasy flier—was made worse due to his position in the plane. “It was a small plane and when there’s no more seats, they put you in the copilot seat,” Mars explains. “When you’re scared of flying it’s supposed to be a good thing … but when things don’t go well, then it’s worse. I would hear the control tower calling ‘Alpha Zulu, Alpha Zulu, drop altitude!’ When we recorded the album that came back… so it just shows that for us when we write songs, it’s a little bit therapeutic.” Mars found even the downtime in the studio inspiring. (“That’s the best vending machine breaks I’ve ever had. We’d go through some incredible ceramics and the last thing we passed before entering the studio was Napoleon’s throne.”) And the curative effects of being in the Louvre surprised the singer . “Usually a studio is not an inspiring place for us,” says Mars. “I thought that no matter where we were, we would do the same record. But for this one, it was different. We made a record that’s specific to the time and to that place and I’m happy about that because it’s really a Polaroid of that moment.” Phoenix plays at 8 pm on Sept. 16 at the Anthem, 901 Wharf St. SW. theanthemdc.com. $55-$95. —Christina Smart

Ever wonder how the buildings and homes we inhabit empower or silence marginalized people? That’s the concept at the heart of INTERSECTIONS: Where Diversity, Equity and Design Meet, a series launching at the National Building Museum on Sept. 16. Prominent Black architects, artists, and designers will lead presentations and discussions on topics ranging from the Underground Railroad to the incorporation of Black hairstyles translated into architectural design. Their goal is to educate participants on the role the built environment plays in social justice and injustice. INTERSECTIONS will also feature three workshops and a roundtable discussion. The programming is a part of the Museum’s ongoing Equity in the Built Environment series, which explores the relationship between social equity and our constructed surroundings. According to Building Museum president and executive director Aileen Fuchs, INTERSECTION’s objective is community engagement and informed advocacy. “Equity is an institutional pillar of the museum,” says Fuchs. “We believe that design and construction are powerful tools that connect people to opportunity and empower communities to thrive.” The Building Museum has focused increasingly on social justice over the past few years, tackling issues like community policing, art-based activism and socioeconomic inequality during the coronavirus pandemic. The inaugural event kicks off Sept. 16 at 5:30 pm, with a presentation and reception with service from Sizzler and Little Minor Taco food trucks as well as music by Les The DJ in the Great Hall. INTERSECTIONS launches Sept. 16 and runs through November at the National Building Museum, 401 F St. NW. nbm.org. $10-$35. —Dora Segall

“The Mother of Darkness,” by Luis Del Valle

Sept. 15 marks the start of Hispanic Heritage Month and while there are many ways and places to celebrate in the District, one group exhibit stands out. Love, Hope, & Art: Woven Thread, curated by the award-winning, Nicaraguan-born, DC-raised artist Luis Del Valle at the Anacostia Arts Center aims to celebrate Hispanic heritage while recognizing Latinx influence and impact on local and national art. Del Valle’s captivating painting, “The Mother of Darkness,” accompanies the exhibition’s flyers and press materials and will be featured in the exhibit. Paying homage to Dia de los Muertos, the image focuses on a woman, surrounded by brilliantly green plants and life-like butterflies. She wears traditional calavera face painting, her head adorned with a crown of bright, lush flowers and eyes that look directly at the viewer. The artist and curator has been decorating the region in rich graffiti murals since he was 13 and, according to his website, studied at Bell Multicultural High School and later the Corcoran College of Art and Design. Jess Randolph, AAC’s associate creative director tells City Paper: “I’m inspired by Del Valle’s creative approach. As an artist, Luis has told Latino and Black stories in his dynamic works.” Love, Hope, & Art also includes watercolors and oil paintings of Carmen Torruella-Quandern capturing everyday people going about their lives in Peru, Guatemala, and the US, as well as artist David Amoroso‘s pop-culture-esque paintings that pay homage to Latino household staples a la Maseca instant corn mix and Fabuloso. Other artists on display are David Dec Zambrano, Joel Vincii Ulmer, Katy Huertas, Keona Clarkand Levi Robinson. According to the press release, “the show honors the rich tapestry of Hispanic culture through a showing of abstract paintings and lifelike portraiture created by artists of different ethnic backgrounds who represent the artistic excellence and cultural diversity of our nation.” On Sept. 17, Del Valle and Anacostia Arts Center, along with partners the National Symphony Orchestra, the Kennedy Center, and Don’t Mute DC, host an opening reception for the show. The latter two organizations will unite to play a unique blend of classical, Latin, and go-go music that truly captures the diversity of DC and the solidarity between the city’s Black and Latinx communities. JusPaul, part of the Don’t Mute DC network, also wants to play with his band Chocolate City Soul. “Our partnerships with Don’t Mute DC and the Kennedy Center highlight how we can all come together to celebrate the authenticity of art through the intersection of Latino and Black cultures,” Randolph offers. Love, Hope, & Art will be on display through Oct. 14 at Anacostia Arts Center, 1231 Good Hope Rd. SE. anacostiaartscenter.com. Free. —Sarah Marloff

Gary Anthes’ photography has been featured in several Studio Gallery exhibits over the past four years. But while Anthes’ latest, Partita Rustica: Life and Death in a Virginia Barn, is also photographic, his new works owe as much, or more, to sculpture, mixed media combines, and even trompe l’œil painting; Ultimately, they’re more about the arrangement than the documentation. During the isolation of the coronavirus pandemic, Anthes experimented with placing natural and man-made objects against the backdrop of interiors of a 200-year-old barn on his property that had been abandoned for the past six decades. Anthes’ images are meditative, even hypnotic in their similarity. (“Partita” refers to a piece of instrumental music composed of variations.) The featured objects include a delicate bird’s nest, a variety of flowers with unnaturally yet gracefully curving stems, fragile peelings of sycamore bark, airy milkweed pods, a tornado-shaped spiral of barbed wire, and a cardinal, a yellow thrush, and a rabbit—each of them dead. These objects are carefully positioned, surrounded by aged wood in a tableau that suggests a proscenium arch. Anthes’ finest works pair botanical forms with glass vases, including hydrangea twinned with a translucent, blue antique flask. In another image, a shaft of light illuminates paper-thin beech leaves in a green vase—a brightly lit rarity in this series, which is dominated by the moody browns of the barn’s aged walls. Partita Rustica runs through Sept. 24 at Studio Gallery, 2108 R St. NW. studiogallerydc.com. Wednesday through Friday 1 am to 6 pm, Saturday 11 am to 6 pm Free. —Louis Jacobson

Tucson to Serve as the Start Site for Aggies’ Season