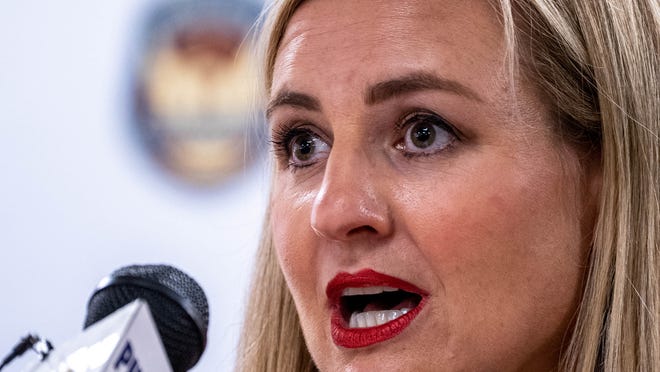 The Phoenix Victim’s Center houses detectives, nurses, advocates and support spaces for those affected by domestic violence and sexual assault. It opened in 1999 and hasn’t seen any improvements in more than a decade.

“The Family Investigations Bureau, where we are today, sees over 2,400 sexual assault and domestic violence victims a year,” Thomas said. “This new space will provide a more welcoming environment with formal interview rooms, private meeting rooms, and a passthrough into the forensic nurse exam room, allowing victims more security and safety.”

Jessica Nicely, founder of the non-profit group Winged Hope, explained that a center like this would have helped during her own experience with domestic violence.

“I grew up as an invisible victim, witnessing domestic violence on a regular basis between my father and my step-mother, so I can tell you first-hand the importance of a family advocacy center,” Nicely said.

She explained that though the $550,000 price tag on renovations might sound high, the benefit that a place like this could have had on her own life is beyond the cost.

“I could have been spared years and years and years of abuse had there been a family advocacy center when I was growing up, had someone brought me to a place like the Phoenix Advocacy Center,” Nicely said.

The renovations would include more video surveillance, an alert lighting system, and added workspace, desks, chairs, and other office supplies for detectives at the center, Thomas said.

“This new and upgraded equipment will enhance our investigative capabilities and and improve the quality of work our men and women do day in and day out,” Chief Williams said. “It’s imperative that we help our victim’s to feel safe and comfortable, and feel as though they can express themselves on what is one of the worst days of their lives.”

The Phoenix Police Department presented the renovation project to the foundation last year and City Council approved it at their July 1 meeting.

Thomas said the renovations will be entirely funded by donations and should be finished by the end of the year.

Auto Pros Collision Center presented a check of $50,000 that was matched by a private donor that wished to remain anonymous. With those donations, funding is already around $120,000, said Thomas.

The department and the foundation decided to use donations to fund these renovations because it was the fastest way to get them done, according to Thomas.

“With a lot of things, foundations, private funding, private partners and public partners can expedite things,” Thomas said. “We knew that through private funding and the community, we could do this in the most expeditious way. And that’s really why we got involved.”

The center will stay open during the renovations, which should finish by the end of the year, according to Thomas.