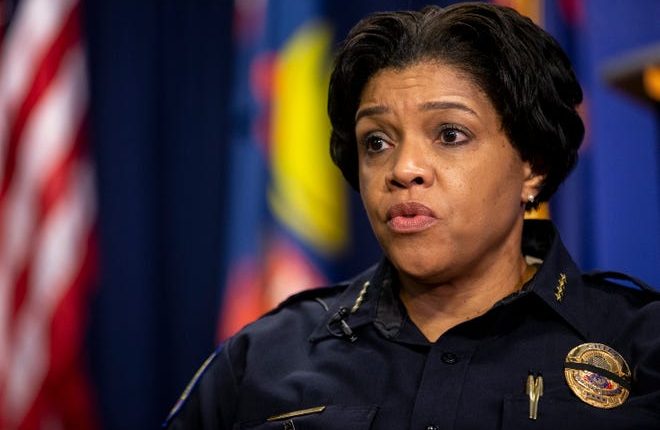 Phoenix Police got burned using the Signal app. Will others learn?

Law enforcement’s handling of a 2020 case involving protesters turned out to be a series of knuckleheaded decisions.

Perhaps the most knuckleheaded was the use by Phoenix Police brass of the secretive messaging app Signal to discuss the case in the aftermath.

There’s evidence no knew that Police Chief Jeri Williams beforehand of the decision to charge protesters as street gang members, or that she and her subordinates used Signal to circumvent a sweeping Justice Department investigation into claims of abuse, excessive use of force and discrimination by Phoenix Police .

But that misses the point.

Which is the implication that goes with merely using disappearing-messaging apps: Someone is hiding something. Even if there may be no proof.

Why else would anyone need an encrypted messaging system that automatically deletes the content?

What did Jeri Williams say via Signal?

The implication packs a serious punch for Phoenix Police and poses a cautionary tale for other government officials. Just look at how the innuendos have been wielded in this case in recent months.

The messages Williams purportedly sent in Signal in August 2021 to underlings in a group named “Just the Top” – and captured in screenshots that were leaked to the media as part of a lawsuit filed by demoted assistant chiefs – were innocuous.

“Don’t act like we don’t have culpability in some of this. Collins should not have been arrested. We should never have sought gang charges. Settle In that guys.”

“A test we are not meant to pass. Settle into that also.”

And a couple of days later:

“Forewarning everyone report will go tomorrow or Friday. It will not floor well for many of us on our floor. Don’t know the extent. The Gang Charges is the one.”

Then, when the city’s independent report was issued, a message fired off to one of the demoted assistant chiefs:

“John, I just heard and I’m sick to my stomach over the news. I don’t know how we got to this point and I can only imagine how you feel. I wish there was something, anything I could do.”

Did she lie? The chief cannot prove otherwise

Williams hurt her own cause big-time when her office told reporters that she had stopped using Signal in 2020 and instructed her executive staff to do likewise – only for those screenshot messages dated 2021 to surface and make her out to be lying.

Her critics took that and ran with it. Williams, the argument goes, knew of the case long before she acknowledged publicly, throwing her subordinates under the bus to save her own job.

And that at the chief’s direction, they were encouraged to use signal on department matters to avoid establishing a records trail.

Williams, of course, had little to counter the narrative.

Her Signal app, the screenshots indicate what is set to delete all messages 30 minutes after they have been read. At most, messages on the app last for four weeks, then are automatically erased.

The absence of a record means there is no way for her to prove what, if any, messages she sent or received (unless she, too, took snapshots of her own).

How many elected leaders also are compromised?

The city of Phoenix, too, got painted with the same innuendos – that officials have largely stayed silent on the lawsuit and Williams’ use of the self-destructing messaging app because they, too, are compromised.

Mayor Kate Gallego, for instance, is on Signal, as are, or were, several other City Council members. As were members in the Maricopa County Attorney’s Office, which prosecuted the protesters’ case.

The same can be said of some state lawmakers and who know what other government officials. If not Signal, then WhatsApp or Telegram or some app with the same auto-erase function.

They all risk being accused of conducting government business in secret and landing in hot water.

Arizona law considers any communication by elected officials and other government employees about work to be a public record that must be maintained and provided upon request.

That’s regardless of whether the communication is done on a work-issued device or a personal one.

Are they destroying public records? That’s a felony

Message-deleting apps present a novel challenge given there’s no database from which to recover the contents or metadata of erased messages. But that doesn’t relieve officials of the duty to review those messages and preserve ones that are public record.

Depending on the importance of the record, it wouldn’t be out of bounds for a lawyer or a judge to assert that a government official using a message-deleting app for business constitutes knowingly “destroying, altering or secreting” a public record – which is a felony.

Determining whether Phoenix Police brass’ use of Signal falls into the crosshairs of the Justice Department’s ongoing probe will take months, perhaps years, to play out.

Odds are, other officials in Arizona will become case studies in the perils of using self-destructing message apps before then. They should consider themselves forewarned.

We can agree, or agree to disagree — but only with the support of readers like you. Please sustain local journalism and subscribe to azcentral.com today.

Many Preventive Medical Services Cost Patients Nothing. Will a Texas Court Decision Change That?