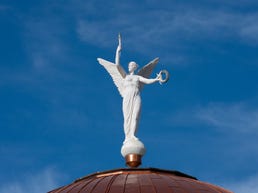 Sgt. Rob Scherer, a department spokesperson, said officers responded to the area of ​​35th Avenue and Broadway Road on Jan. 3 after receiving a call from a resident claiming a man was trying to enter his backyard. The resident told police that the man was on top of his backyard fence and grew angry after the resident confronted him.

Footage shows the officers confronting the man in an ally near the home as the man sits with his back against the fence. Video shows the man jump to a standing position as officers order him to drop a pair of scissors in his hand. Two officers fire stun guns at the man shortly after commanding him to drop the scissors, but the move appears to have little effect as the man pulls the barbs off his body.

Another officer repeatedly orders the man not to take a step forward when the man starts to approach the officers. That officer can be seen shooting the man seven times — six while he’s standing and one more after he had collapsed onto the ground — and continued ordering the man to drop the scissors.

While the Spanish-speaking officer orders the man to drop the scissors, he doesn’t appear to order the man not to approach the officers.

The man with the scissors does not speak in the released video. Police had not identified the deceased man as of Tuesday evening.

Scherer said officers performed life-preserving measures before the man was taken to the hospital where he was pronounced dead. The officer who shot the man is a 15-year veteran with the department.

Since 2019, the Phoenix Police Department has produced videos with summaries of police shootings that include some body-camera footage, 911 calls and a narration of the events that led to the shooting.

The department launched a criminal and administrative investigation into the shooting, which is standard protocol.

Kearny Ray rains down on Tucson The Gregory 36-22