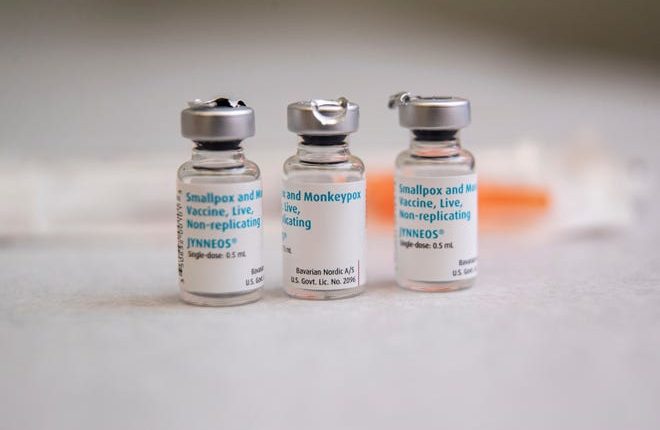 Phoenix Pride is hosting a monkeypox vaccine event on Oct. 1

Individuals at risk for contracting monkeypox can get a vaccine at events connected with upcoming Pride festivals in Phoenix and Tucson.

The rate of new monkeypox cases in Arizona has slowed and limited vaccine supply is no longer the problem it was at the beginning of the outbreak.

Because of the more plentiful supply, vaccine strategy in Arizona’s two most populated counties is changing from a centralized approach at county public health clinics to using more community partners.

Public health officials say there’s ongoing transmission of the virus, which is why they continue to ask people who have been exposed or who are at risk of exposure to get vaccinated. The potentially fatal virus has been primarily circulating among men who have sex with men, but it can be transmitted to anyone.

Monkeypox is not classified as a sexually transmitted disease, or STD. However, it is being transmitted in close, sustained physical contact, which can include intimate activity. It primarily spreads through skin-to-skin contact, although it can also spread through respiratory secretions during prolonged, face-to-face contact.

‘Pride In Your Health’ monkeypox vaccine clinic will be Oct. 1 in Phoenix

Phoenix Pride and the Southwest Center have scheduled a free “Pride In Your Health” monkeypox vaccine clinic, supported by the Maricopa County Department of Public Health that’s open to anyone who wants a vaccine from 8 am to 4 pm on Saturday Oct. 1, at the Southwest Center campus, 1101 N. Central Ave., Phoenix.

Organizers will accept a limited number of walk-ins to get a vaccine but appointments are strongly recommended at bit.ly/swcclinic or by emailing [email protected] Phoenix Pride will be held Oct. 15-16 at Steele Indian School Park in Phoenix and organizers say the vaccine clinic will give attendees an opportunity to get vaccinated prior to attending.

At a time when gay and bi men are being stigmatized in association with the spread of monkeypox infections, it’s important to create safe spaces where people know they can be comfortable receiving the preventive care that they need, Phoenix Pride executive director Mike Fornelli said in a news release issued Thursday morning.

“Phoenix Pride is committed to promoting the health and well-being of our entire community, including the LGBTQ+ community and our allies, but also the public at large,” Fornelli said in the release.

It’s not yet clear whether the monekypox vaccine will be available at the Phoenix Pride event itself, though there will be educational materials, including information about the vaccine, organizers said.

Vaccine will be available Oct. 1 at Tucson Pride

The Pima County Health Department will have two mobile vans at Tucson Pride on Saturday, Oct. 1 that will be offering monkeypox vaccines, as well HIV/Sexually Transmitted Disease testing, COVID-19 vaccines and educational materials, spokesperson Anthony Gimino wrote in an email.

Pima County health officials say they are offering the monkeypox vaccine to anyone who self-identifies as having been in contact with someone who has monkeypox or who has had sexual contact or close physical contact within the last 14 days with more than one man or people assigned male at birth.

Arizona as of Wednesday had 430 confirmed monkeypox cases, according to the US Centers for Disease Control and Prevention, and the US case tally was at 24,364. States with the highest number of cases, in order, are California, New York, Florida, Texas and Georgia. California had 4,753 confirmed cases as of Wednesday.

Back in action:Phoenix drag queen is back on stage after monkeypox recovery

Arizona, which is the 14th largest state in population, had reported the 14th-highest number of cases of all states and Washington, DC, as of Wednesday.

Most of Arizona’s cases are in Maricopa County, which was reporting 353 cases as of Tuesday. Pima County reported 48 cases as of Wednesday. Cases have been reported in Apache, Cochise, Coconino, Gila, Mohave, Navajo, Pinal, and Yavapai counties, according to the most recent data from the Arizona Department of Health Services.

While most patients with monkeypox fully recover from the virus without treatment, some patients may get seriously ill and the monkeypox lesions can be extremely painful. There’s also the potential for misdiagnosis since some monkeypox patients have had only a single lesion or sore in their mouth or genitals.

A study published July 21 in the New England Journal of Medicine found that one in 10 of the infected people included in the study had a single genital lesion.

‘The hope is that the transmission can stop completely’

Maricopa County as of Sept. 16 had administered just over 7,600 doses of the monkeypox vaccine and more supply is being shared with community partners like the Southwest Center, said Dr. Nick Staab, medical epidemiologist for the Maricopa County Health Department.

Cases have slowed, but the virus has not gone away, Staab said.

“Cases will continue to rise, just because we’re seeing ongoing transmission. … How long that will last, I don’t know. Public health doesn’t know that,” Staab said. “We are hopeful that with all the vaccine that we’ve been able to give, and all the communications that have gone out, that we will continue to see a slowing of cases and hopefully, eventually it will stop.”

Helping those in need:He got through monkeypox with friends’ help. Now a Phoenix drag queen is sharing care kits

Monkeypox had never been identified in Arizona prior to this year so the hope is that the transmission can stop completely, Staab said.

“We have been very successful at getting the vaccine out to the high risk group. Also, ,just the communication from public health as well as community partners is helping to slow those cases,” Staab said.

“There’s not been a lot of concern in schools, in health care facilities. … I think that’s good news and why our focus can continue to be on getting vaccines out there and really working with the high-risk population.”

While vaccine supply was once a problem, the supply expanded after the US Food and Drug Administration on Aug. 9 issued an emergency use authorization that allowed for splitting one dose of the Jynneos monkeypox vaccine into four or five doses.Those smaller doses must be administered intradermally between the layers of the skin rather than via a subcutaneous injection.

Both Maricopa and Pima counties are using the smaller doses and administering them intradermally, county public health officials say. Subcutaneous injections are still recommended for individuals ages 18 and younger.

With a more plentiful supply, Staab said there will likely be more opportunities to get the monkeypox vaccine outside of county public health clinics and events. County clinics are offering the vaccine, and Maricopa County has held events outside of clinics, too, at the Adam Diaz Senior Center in Maryvale, and at Warehouse215 in downtown Phoenix, Staab said.

So far, neither the Maricopa County nor Pima County health departments have offered the monkeypox vaccine in gay bars or community-based events, though that strategy is changing, vaccine events connected with Pride festivals indicate.

“We have started to give out the vaccine to community partners. We now have 16 providers in addition to public health who have vaccine and are doing operations either within their existing clinics or outreach activities,” Staab said.

Although its supply of the monekypox vaccine has increased, the Maricopa County Department of Public Health is limiting the vaccine for self-identified high-risk individuals, including contacts of someone with monkeypox, and people who are aware that one of their sexual partners in the last two weeks has been diagnosed with monkeypox.

The vaccine is not recommended for the majority of health care providers unless they have a known monkeypox exposure, Maricopa County health officials said. Anyone who has had a prior monkeypox infection does not need the vaccine, they said.

County officials say residents can sign up to receive updates via a monkeypox vaccine interest survey or by calling the Maricopa CARES line at 602-506-6767. More information about monkeypox is available at the county’s website at maricopa.gov/5825/Monkeypox.

Phoenix Pride leaders emphasize that their upcoming Oct. 1 clinic is open to anyone, as long as there are enough appointments and supply, Phoenix Pride spokesperson Jeremy Helfgot said in an interview.

“It is a fully public event, LGBTQ+, anybody. … It’s part of the Fall Into Pride series of events that we’re holding, leading up to the festival and parade weekend, which is the Oct. 15 and 16 weekend, ” Helpgot said.

“Part of the reason for doing this a couple of weeks ahead of Pride is, one, to give people the opportunity to be vaccinated ahead of time and, two, to provide education to the community as well so people understand how to best protect themselves .”

KHN’s ‘What the Health?’: Biden Declares the Pandemic ‘Over’