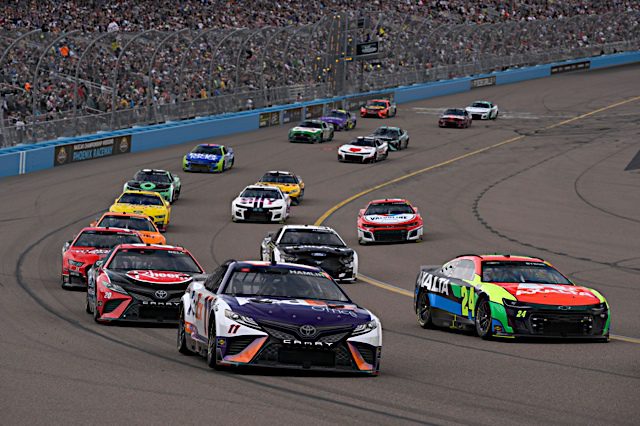 Phoenix Raceway was the first shorter track on the schedule for the new NextGen car. The question is whether the NextGen car would work on shorter tracks. The answer appears to be, sure, why not? However, this wasn’t the greatest show out there.

Before we get going, The Indianapolis Star reported Monday that in reaction to criticism that there was all but no post-race coverage after the Firestone Grand Prix of St. Petersburg last month, they have created a Peacock-exclusive post-race show for all INDYCAR races, starting with Sunday’s Xpel 375 at Texas Motor Speedway. This post-race show will air for roughly 30 minutes after INDYCAR races, although the length can be modified based on how much post-race coverage ends up airing on NBC or USA.

Sunday saw 312 miles of racing in the Sonoran Desert and three would-be first-time winners battling it out at the end of the race. I honestly cannot remember the last time that this happened. Chase Briscoe came out of Phoenix with his first career victory, a feel-good story given the substantial ups and downs that have marked his career to this point.

Prior to the race, Danica Patrick got her first one-on-one opportunity with FOX Sports. Here, she sat down with Tyler Reddick to talk about the start to his 2022 season. The general idea of ​​this was simple: What does Reddick need to do in order to win? The second part of this aired during the FOX portion of NASCAR RaceDay and focused on the recent in-car issues that Reddick has had with leg numbness. His notion is that his own workout regimen is partially to blame. While that is possible, given the current rules, not a whole lot can be done to help him out.

I felt that Patrick did just fine with this interview. That said, I wish they could have aired the whole thing at once instead of splitting it up between two channels. But that’s just me. I don’t really want things split up like that.

In addition, Alex Bowman sat down with Jamie Little to talk about his outlook toward victories in the Cup Series, his relationship with teammate Kyle Larson, the recent t-shirt battles between himself and Kyle Busch, and his initiatives involving animal shelters. Aside from the silly entrepreneurial feuds, I found the notion of his relationship with Larson to be interesting. As we know, there’s been some intra-team strife involving Larson recently. That clearly doesn’t register with Bowman, who appears to see him for what he is on the track. We’ll see if that changes as the season continues on.

If you go by lead changes, Sunday’s Cup race was the least competitive race of the year to date. There were only 14 lead changes, which is actually less than they’ve had in the previous four Cup races at Phoenix. The new car didn’t really make that much of a difference. It was just a little bit slower under green since the cars are down 80 horsepower. That said, the race legitimately took one second longer to run 312 laps than the Championship Race back in November.

There was a decent amount of racing for position to be had on Sunday. However, I did find a lot of the coverage to be centered at the front of the field. Given the current rules, it’s a lot harder to pull away now than it was with the Gen6 car. That is something worth watching as the season goes on.

This was more of a problem late in the race, where you had drivers coming out of nowhere to post good finishes. For example, Kurt Busch finished fifth on Sunday. I don’t recall Kurt having his MoneyLion No. 45 in the top 10 all day prior to the final five laps of the race (He spent most of the day in the 12-15 range). It’s times like these that I wish NASCAR had Al Kamel Systems scoring that IMSA, the FIA ​​World Endurance Championship and other series use. The general public would have access to a detailed lap chart for every lap of the race (as of now, that is only provided for the start, the end of each stage and the finish).

Post-race coverage was fairly brief. Viewers saw interviews with the top three finishers (Briscoe, Reddick and Ross Chastain) and also got post-race analysis from the broadcast booth before FOX left Phoenix. In addition, there was also a replay of the last-lap crash that resulted in Austin Dillon failing to get back to the start-finish line, ruining what would have likely been a top 10 finish (he ended up 21st).

I wasn’t really a fan of how FOX covered that as viewers never actually saw Dillon’s car until the aforementioned replay. This was something like 10 minutes after the crash and most of the post-race celebratory stuff was already over. I don’t know why they felt the need to wait so long. Having said that, they did state that Dillon walked away from his smashed-in Chevrolet long before the replay aired.

Overall, this broadcast had a fairly narrow focus that I wasn’t particularly a fan of. That said, there was a decent amount of on-track action to show when they could.

Patrick’s second race in the broadcast booth was arguably better than her first. I figured that this would be the case. Getting your reps in can be important in more than just baseball. It’s applicable to driving in a race, pitting a car or calling a race. Having consecutive weeks in the booth allowed Patrick to be a little more comfortable in the booth and feel that she could contribute more.

And yes, Clint Bowyer’s Twitter got hacked right before the race. Rather brazen, if I do say so myself.

Saturday saw the Xfinity Series take on the one-mile tri-oval for 200 miles of action. Here, Noah Gragson proved that he was the cream of the crop.

Prior to the race, a decent amount of the discussion was centered around the Ryan Sieg–Ty Gibbs dispute from Las Vegas. That whole situation was rehashed and viewers got a chance to hear from both drivers. Luckily, that whole mess has been quashed and we won’t have to worry about it going forward. It just would have cost the Siegs a bunch of money.

Saturday saw Daniel Suarez join Joey Logano in the broadcast booth for his first visit of the season. I felt that the two drivers really did work well together. Suarez in the booth doesn’t come off as the kind of analyst who wants to make things about himself. He wants to be as informative as possible.

Do I think race fans would like him in the booth more often? I do not know. There is likely a group of race fans that have trouble understanding Suarez. I can see that, but it’s not a problem for me. Then again, I’ve actually met Suarez in the past.

He isn’t that hard to understand. I’ve got family members in Kentucky that I find more difficult to understand than Suarez.

Logano had some good insights as well. For example, Gibbs spun out on lap 55 in turn 2 after contact from AJ Allmendinger. Logano theorized that a sluggish upshift from third to fourth gear cost Gibbs a small amount of time that effectively got him spun out. Had that not occurred, he would not have been hit.

The issues that put Riley Herbst in the wall early on weren’t really well explained. Herbst claimed that he simply lost his brakes entering turn 3, and that put him in the wall. It seemed to be more than that, especially how early in the race that occurred. I personally think something else broke, but I’m not sure what it was.

Post-race coverage was quite brief. Viewers saw interviews with Gragson and his primary challenger on the afternoon, Brandon Jones, before leaving Phoenix.

Honestly, FOX Sports was likely sleeping on Jones all day. Remember that he has a previous victory at Phoenix, beating the likes of Kyle Busch straight up to do so. That’s No Easy feat. He was substantially stronger Saturday than he had been in the first three races of the year, and I don’t really think he got the proper credit for that.

That’s all for this week. Next weekend will likely be the busiest weekend of the year. NASCAR’s three National-level series will all be at the revamped Atlanta Motor Speedway. Meanwhile, INDYCAR will be at Texas Motor Speedway. The IMSA WeatherTech SportsCar Championship heads the SuperSebring weekend, along with the FIA ​​World Endurance Championship and Michelin Pilot Challenge. Finally, Monster Energy AMA Supercross teams will be at Lucas Oil Stadium in Indianapolis and MotoGP will be at the new Mandalika circuit in Indonesia. TV Listings can be found here.

We will provide critiques of the Cup, Xfinity and Truck races from Atlanta in next week’s edition of Couch Potato Tuesday here at Frontstretch. Note that Jeff Gordon will be back in the booth for the Cup race, as announced during the Ruoff Mortgage 500k on Sunday. For the Critic’s Annex, we will look at the broadcast booth debut of Krista Voda (now Krista Kelley) in Friday night’s telecast of the ARCA Menards Series General Tire 150 from Phoenix Raceway.

As always, if you choose to contact a network by email, do so in a courteous manner. Network representatives are far more likely to respond to emails that ask questions politely rather than emails full of rants and vitriol.

A daily email update (Monday through Friday) providing racing news, commentary, features, and information from Frontstretch.com
We hate spam. Your email address will not be sold or shared with anyone else.