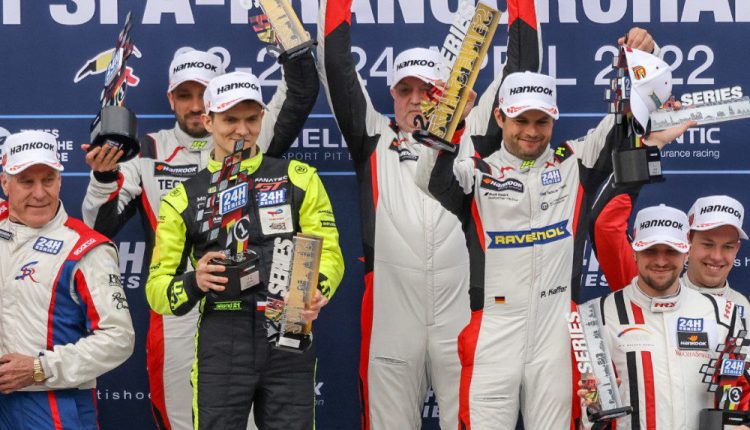 Phoenix Racing won the Hankook 12H of Spa-Francorchamps, securing Audi’s second victory of the year in the 24H Series after Team WRT’s win in Dubai at the start of the year.

the no 18 Audi R8 LMS GT3 Evo II of Michael Doppelmayr, Pierre Kaffer, Elia Erhart and Patryk Krupinski took the overall race win after starting the second part of the race on Sunday from third place behind WTM Racing and CP Racing, who finished third and second respectively .

The Audi stayed close to the lead throughout the day, first jumping to the lead by staying out when leaders pitted during a Code 60 for a stopped TCR Audi.

When the Phoenix Audi then pitted, it promoted the No. 85 CP Racing Mercedes-AMG GT3 Evo back into the lead shortly before the No. 22 Ferrari 488 GTE Evo 2020 took the lead at La Source.

CP Racing and WTM Racing stayed out front for the majority for Sunday’s running before the No. 18 Audi manages to move up to first place in the closing stages of the race.

Its victory was cemented when WTM’s No. 22 Ferrari came in for a late pitstop with under ten minutes on the clock.

The Ferrari, with Georg Weiss, Leonard Weiss Jochen Krumbach and Daniel Keilwitz behind the wheel, took the lead from CP Racing’s No. 85 Mercedes-AMG GT3 Evo early during Sunday’s running.

It had to fight back from two separate punctures during the course of 6.5 hours but remained in contention until its late splash.

the no 85 Mercedes, driven by Charles Putman, Charles Espenlaub and Shane Lewis, finished in second place, a lap down on the winners but nearly a full minute ahead of the third-placed Ferrari.

the no 91 Herberth Motorsport Porsche 911 GT3 R of Daniel Allemann, Ralf Bohn and Jürgen Häring, which similarly pitted in the final minutes, finished fourth ahead of JUTA Racing’s No. 71 Audi.

Car Collection Motorsport’s No. 34 Audi finished sixth after an eventful run headlined by multiple punctures, including one with nine minutes remaining resulting from a spin at Raidillon.

It finished a lap ahead of Sainteloc Racing’s No. 26 Audi, whose run included a time penalty for contact with the No. 6 BoDa by Bas Koeten Racing Bentley Continental GT3.

The Bentley, which had started the race from second place on Saturday, failed to reach the finish.

In the GT4 class, TEAM ACP – Tangerine Associates took the class win after its closest rival retired with a mechanical issue.

The Belgian squad’s no. 421 BMW M4 GT4, driven by Catesby Jones, Wim Spinoy and Steven Thomas, had been in battle with the No. 400 ALFAB Racing McLaren 570S GT4 of Erik Behrens and Daniel Ros for much of the race.

The battle was decided in favor of the BMW when the Swedish-flagged McLaren retired with a reported turbocharger failure with 178 laps completed.

This appeared to leave the way clear for a one-two finish for BMW with the no. 422 Veidec Racing by JJ Motorsport BMW poised to take over place.

Instead, however, CWS Engineering’s no. 478 Ginetta G56 GT4 of Colin White, Freddie Tomlinson and Mike Simpson finished the race in second place.

Davey Euwema is a Sportscar365 reporter based in The Netherlands, covering the FIA ​​World Endurance Championship, DTM, Fanatec GT World Challenge Europe powered by AWS and the IMSA WeatherTech SportsCar Championship, among other series.