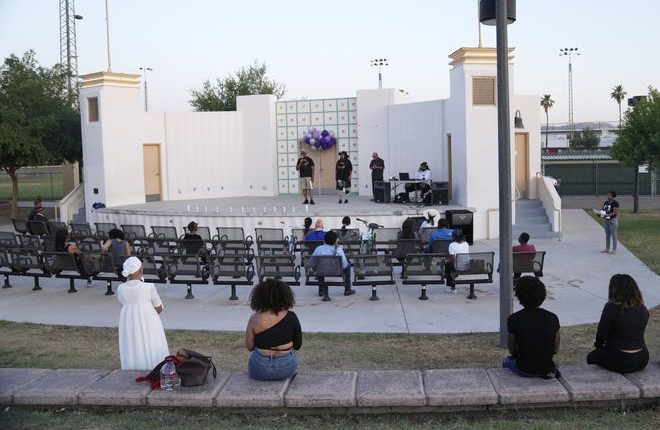 A few dozen community members gathered at Eastlake Park in Phoenix on Wednesday evening to honor and remember those whose lives were cut short during a racist, hate-filled mass shooting in Buffalo, New York.

“At this time it’s important for Black and Brown unity to be stronger than ever,” Garcia said. “I’m here to support you all. I know these families will never see their loved ones and — having experienced El Paso — I’ve seen the trauma that happens beyond those folks that were impacted.”

The vigil comes several days after the Saturday shooting at a Tops grocery store in a predominately Black neighborhood where ten people were killed and three others injured. Of those shot, 11 were Black.

The suspect, 18-year-old Payton Gendren, allegedly posted a 180-page document espousing a racist conspiracy theory that white Americans were being replaced by minorities and immigrants. Gendren is suspected of planning the mass shooting for months while collecting weapons and ammunition that he hid from his family.

Rolando Rhymes with the non-profit organization Chicanos Por La Causa asked for a moment of silence for the families who lost their loved ones in the attack.

A prayer was offered in remembrance of the victims by religious leaders. The crowd later released balloons into the air as Stevie Wonder’s Love’s played in Need of Love Today.

Buffalo Police Commissioner Joseph Gramaglia said Gendren arrived Saturday afternoon at a Tops Friendly Markets grocery store on the city’s Near East Side armed with an assault-style rifle and tactical gear and shot four people in the parking lot — three of whom died. He then entered the store and continued the violent rampage while wearing a camera and streaming on the live-streaming site Twitch.

A Twitch spokesperson said in a statement that it ended the live stream “less than two minutes after the violence started.”

A retired Buffalo police officer identified by authorities as Aaron Salter, working in the store as a security guard, confronted the shooter and shot him. Those bullets struck the attacker’s tactical vest, preventing injury, Gramaglia said. The gunman returned fire and fatally shot Salter.

The shooter “worked his way through the store” firing at others, and in the store’s lobby was confronted by Buffalo police, Gramaglia said. Then the suspect pointed his own gun at his neck before officers talked him down and arrested him.

The massacre sent ripples throughout the country, which has continuously seen mass shootings in cities like Charleston, South Carolina, and El Paso, Texas, with young, white men targeting minority communities.

President Joe Biden and First Lady Jill Biden visited a memorial outside the grocery store where they laid a bouquet of white flowers before meeting with families, first responders and law enforcement officials.

Biden condemned the attack, calling it a “murderous, racist rampage” and an act of “terrorism” steeped in white supremacy.

“Hate will not prevail, and white supremacy will not have the last word,” Biden said. “But evil did come to Buffalo. It’s come to all too many places, manifested in young men who massacred innocent people in the name of hateful and perverse ideology rooted in fear and racism.”

“White supremacy is a poison,” he added. “It’s a poison running through our body politics that’s been allowed to fester and grow right in front of our eyes.”

“It strikes us in our very hearts to know that there’s such evil that lurks out there,” she said. “This individual – this white supremacist – who just perpetrated a hate crime on an innocent community, will spend the rest of his days behind bars. And heaven help him in the next world as well.”

Authorities have charged gendren with first-degree murder, though John Flynn, Erie County’s attorney district, said along with the murder charge, his office and federal authorities were pursuing others, from terrorism to hate crimes.

Dead animals tossed into recycle bins in the city of Tucson

This Facebook Page Shares The Weirdest Food Products And Combinations Nobody Asked For, Here Are 95 Of The Most Confusing