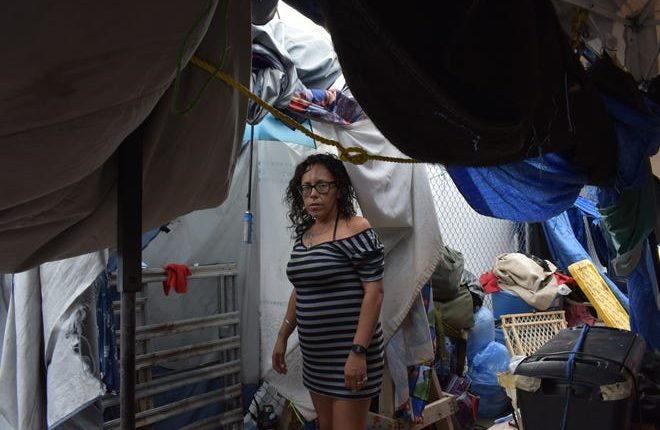 A group of Phoenix residents are suing the city over a homeless encampment west of downtown saying it has caused them irreparable harm and that the city needs to fix it.

Fifteen residents, who own homes, businesses and land between 7th and 15th avenues and between Van Buren and Grant streets, say the encampment has subjected them to violence and damaged property and has littered their area with trash and human waste.

Worse, they say in a lawsuit filed Aug. 10 in Maricopa County Superior Court, is a “humanitarian crisis” unfolding in which individuals who live on the streets are regularly found dead in the area. They pointed to news media articles that showed 500 individuals who were homeless died in Phoenix in 2021.

The residents claim the city has acted illegally and unconstitutionally by enacting policies that “concentrate” individuals experiencing homelessness in this area by transporting them there from other places. The city then doesn’t enact policies that prohibit illegal activity, like loitering or drunken and disorderly conduct, the lawsuit alleges.

In effect, the city has “simultaneously neglected and exacerbated” the homelessness crisis, the lawsuit says.

The lawsuit does not target the Human Services Campus in the area, which provides nightly shelter to 470 individuals experiencing homelessness, but rather the surrounding areas on 9th and 13th avenues where at least 400 people have set up tents.

Attorney Ilan Wurman said the residents suing have always understood a certain amount of homelessness exists in the Valley, particularly in their area. But it’s gotten worse since 2019 after a US Court of Appeals for the 9th Circuit struck down a law in Boise that made urban camping illegal, they say.

The 2018 ruling set a precedent that cities could not criminalize homelessness if there’s no accessible, indoor shelter for individuals.

“To be clear, we’re not challenging that decision at all. We do not want to send these homeless persons to jail,” Wurman said. “What this case is about is the city of Phoenix has used the 9th Circuit case as an excuse to abdicate responsibility for the homelessness crisis.”

Wurman said most of the home and property owners suing were part of a residential coalition that tried to work with the city amicably to get their concerns addressed but they feel like the city has given up.

The residents are not asking for monetary damages from the city but are asking a judge to order the city to “refrain from expanding, maintaining, and/or operating” the encampment and to “immediately abate the nuisance.”

Wurman said the residents would like to see a long-term solution like permanent shelters made available for the people living in tents but in the near term, the city should create “structured camping grounds” where the law can be enforced and cleanliness maintained on city lots perhaps near the airport.

It’s not expensive or hard to do, Wurman told The Arizona Republic. “The city … doesn’t have the political will. They don’t want to solve this problem.”

City officials could seek to challenge the legality of the lawsuit. Otherwise, a court judge may call for a hearing on the residents’ request for immediate relief.

City officials did not immediately respond to request for comment from The Republic.

Mayor Kate Gallego declined to comment, saying it was in litigation.

Photographs included in the complaint show car windows smashed from apparent break ins, individuals engaging in drugs, and individuals actively urinating on buildings as well as what appears to be human feces littered throughout various areas.

Photos also show people who appear to be homeless sleeping alongside buildings, and rows of tents and trash-covering streets and sidewalks.

Freddy Brown, president of PBF manufacturing who’s one of the plaintiffs suing the city, said his employees frequently clean urine off the building walls and that the waste sometimes makes its way inside the facility.

At night, the employees are scared to leave the building for their safety and one of his workers was assaulted by a person living on the streets, the lawsuit claims.

Joel and Jo-Ann Coplin say the encampments have essentially shut down their business, Gallery 119.

They’ve had their yard set on fire, car windows smashed and a rock thrown through their property windows, according to the lawsuit. They’re contemplating selling their business but are afraid the property won’t be worth much.

The complaint also alleges that owners of a sub shop in the area, Joe and Deborah Faillace, find drug needles in or around their business and that it has made it difficult to comply with county health regulations.

Benzene with your bisque? New studies highlight the dangers of ‘cooking with gas’

KHN’s ‘What the Health?’: A Big Week for Biden