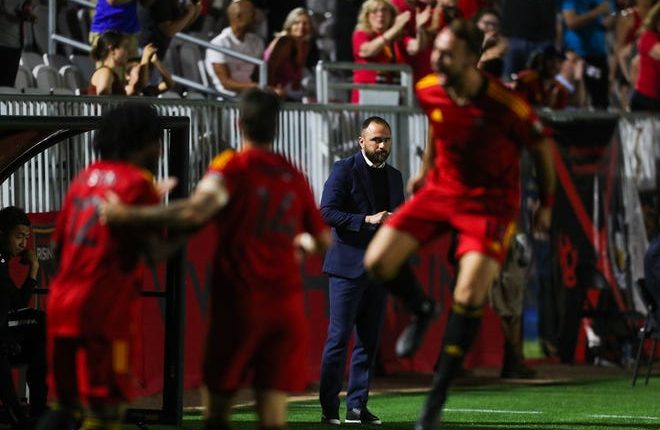 Phoenix Rising advances to fourth round of US Open Cup

Before walking to shake the hand of New Mexico United manager Zach Prince, his Phoenix Rising counterpart Rick Schantz turned to his support staff and shared a four-way hug.

Behind him, a few hundred fans dotted Wild Horse Pass’ typically-packed stands. In the public perception, this is the reality of the US Open Cup, the 109-year old competition that returned this spring after two COVID-19 cancellations. Rarely is it seen with the same prestige as league success.

But to the rising players and coaches, it offers a unique opportunity.

After Phoenix’s 2-1 third-round win — its second in five days over New Mexico after a 1-0 win in USL play on Saturday — striker Greg Hurst thrice extolled the importance of “cup football.” Joey Calistri and Joey Farrell spoke with each other about wanting to make a deep run. Schantz, in his press conference, reveled in the storied history of a tournament that was the second-longest continuously operating competition in the world before COVID-19.

“I’m very happy that we’ve moved on to the next round,” Schantz said. “This is a great tournament.”

Soon, it could get even better for Phoenix.

The win Wednesday put them in the round of 32 for the first time since 2014, when the club was known as Arizona United. That run ended at the hands of MLS’s LA Galaxy — the last time Rising played an MLS opponent in competitive play. In Thursday’s draw, though, Phoenix is ​​in a four-team pod with the MLS’s Seattle Sounders and San Jose Earthquakes, as well as USL Championship foe Sacramento Republic. That means Rising have a two-in-three chance of playing an MLS team and a one-in-three chance of doing so at Wild Horse Pass.

“I’ve always wanted to have a meaningful game here against an MLS team,” Schantz said, reflecting a desire held by his players. It would, after all, be among the most important games in club history.

Phoenix opened the scoring with a fortuitous own goal off the chest of Will Seymore in the sixth minute, but allowed New Mexico to strike back with a 65th minute equalizer. New Mexico wing back Harry Swartz swung a perfect through ball in behind Phoenix’s back line setting striker Nico Brett up for a first-time finish past Ben Lundt.

It was the only time on the night that New Mexico was able to get behind a Rising team that set up in its rarely used 3-5-2 formation to counteract the away side’s attacking pace.

Finally, in the 82nd minute, Hurst broke through. Chandler native Channing Chasten, starting for the first time in his young rising career, whipped in a cross to the back post, where winger Santi Moar headed back across to Hurst, who did the rest before peeling off to wave goodbye to a small but vocal contingent of traveling supporters.

“It’s always good to score goals, especially the game winner,” Hurst said. “A big game for us, as well. Second game in (five) days, against the same opposition. We knew it was gonna be tough and to come out of that with a win, it’s so important in cup football and thankfully, we got that done.”

If everything goes Phoenix’s way in the draw Thursday and next month’s fourth round, Hurst will be waving at a few thousand more fans next time around.

Yuma border wall gaps leading to flood of illegal immigrants: ‘We’re going to get this backlog’