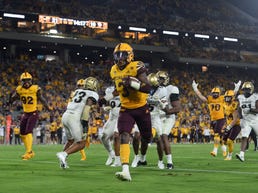 Phoenix Rising FC beat LA Galaxy II on Wednesday night and had a 62-38 advantage in possession, but lost 3-0, their first since August 25, to nothing.

Rising (17-4-5) played with a man behind for the entire second half, surrendering all three goals late to a Galaxy II squad desperate for points.

While Rising almost secured the title in the Pacific Division with 56 points, Galaxy II (9-11-5, 32 points) retains a two-point lead on fourth place in the division over Oakland (8-11-6, 30 points).

Rising’s problems began when Tate Schmitt was shown the red card two minutes after stoppage time in the first half after referee Benjamin Meyer ruled the defender for Rémi Cabral of LA Galaxy II to prevent a scoring chance.

Rising worked hard to hold the ball, shooting Los Dos out 13-7, but LA’s extra man paid off in the 77th.

The young goalkeeper mistreated a deflected shot in the 77th minute and gave LA a 1-0 lead.

LA later scored a goal from Preston Judd in the 88th minute and Jorge Hernandez in added time.

Next up for Rising is a visit to the Pacific Division’s third-placed team, Orange County SC (10-8-7, 37 points), 19 points behind Rising.

Kick-off is Saturday at 7 p.m. The game will be broadcast live on ESPN Plus, an over-the-top subscription video streaming service available on the Internet.