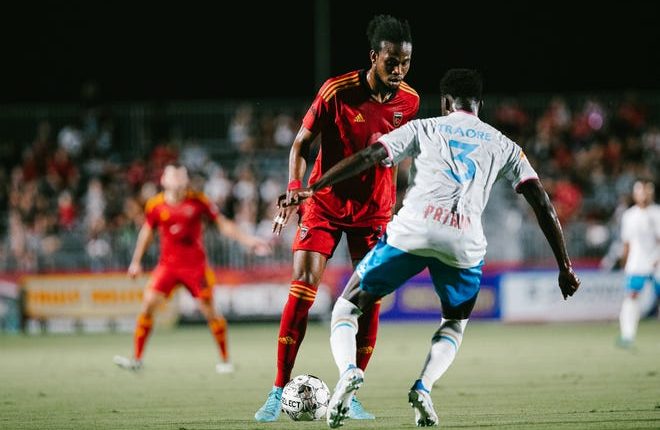 During a humid Saturday evening at Wild Horse Pass, Phoenix Rising and Las Vegas Lights ended the night in a draw, 0-0. In a crucial game for Rising, the team was unable inch closer to a playoff spot.

Instead of accumulating three points, which would put them one point behind in a tie for eighth place with the Galaxy, only one point was added on and time is beginning to run out for Rising.

“Right now, we just have to concentrate on our performance and make sure we keep improving every week,” Phoenix Rising head coach Nick Schantz expressed. “They still performed very well in a very difficult humid evening.”

However, there was no lack of perseverance from this Rising team.

“Five straight clean sheets is pretty impressive,” Schantz said. “We have played a lot of really good attacking teams lately…but struggled to break them (Las Vegas) down. We were settling to hit crosses a little too early. We weren’t shooting from the top of the box and that’s where the space was, I think. It’s a little bit frustrating but I told the team as long as they continue to get clean sheets, we’ll be ok.”

Throughout the game Rising possessed the ball 56.6% compared to Las Vegas’ 44.4% possession percentage, but their shooting accuracy was only 12.5%.

In the 10th minute of the match, Las Vegas’ Cal Jennings broke away and went one-on-one against Rising goalkeeper Ben Lundt. Jennings attempted to take the shot from the left side but Lundt was there to make a kick save.

Lundt now leads the league with 80 saves and ranks fifth in USL with eight shutouts.

Moments later, Vegas caught Lundt by surprise but defender Darnell King slide across the goal line and made the save with his right foot. This extended Rising’s shutout streak, making it the second longest in club history at 455 minutes.

“I thought we did a really good job of handling Cal Jennings and Danny Trejo,” Schantz said. “Putting Darnell on the left and having him on his right foot to defend has been helpful.”

One of the biggest scoring opportunities came in the 29th minute, when forward JJ Williams himself picked up off the ground, pushed through Vegas’ defenders and got off a left-footed shot. Luckily for Vegas, the shot bounced off the left post, deflected off Vegas goalkeeper Tomas Romero’s back and he was able to stop the ball’s rebound momentum.

“He (JJ Williams) has been very good,” Schantz expressed. “I think tonight unfortunately the service he was getting was a little bit late. We are settling for balls when he was 1v3, but when we started playing into his feet he was very dangerous….we are going to have to find his feet and we have to play off of him a little bit more.”

Heading into the second half, the chemistry and sense of execution both teams started with seemed to decimate.

“In the first 15 to 20 minutes of the second half, I think both teams were completely lost and there was no structure to the game.” Schantz said. “It looked kind of like a backyard football game…half the guys wanted to slow it down and the other half wanted to keep running.”

A second chance for rising to score came in the 64th minute when midfielder Luis Sejas knocked a pass to the back post and defender James Musa raised his head and attempted to hit the ball into the corner between the post and the Vegas goalkeeper. But the accuracy was off and the header was wide of the post.

Despite the effort made by both teams, neither were able to finish the job. Phoenix Rising are hitting the road and will face Orange County SC in an attempt to close the point gap and prove to the league they still have what it takes to compete.

“Listen, (we) just have to keep (our) head up and keep focused on what (we) are doing,” Schantz expressed. “Believe in what (the) plan is, stick to it, stick to the style of play and who we want to be.”