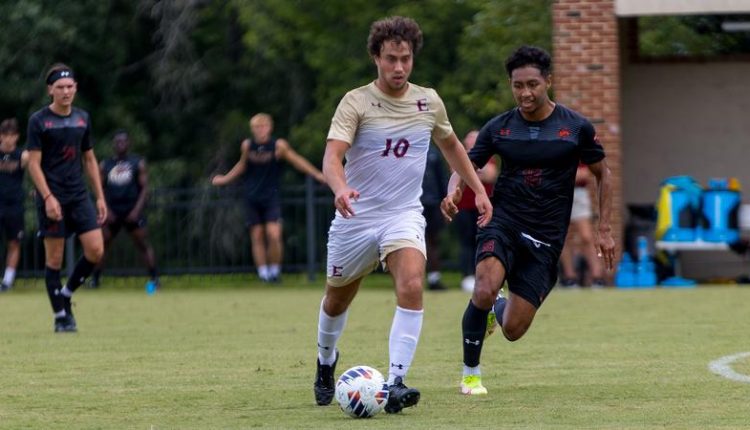 Phoenix Seize Three CAA Points on the Road at Delaware

NEWARK, Del. – The Elon University men’s soccer team posted its third straight shutout as the Phoenix earned three Colonial Athletic Association points on the road in its 2-0 victory at Delaware on Saturday, Sept. 17.

The victory improved the maroon and gold to 5-1 overall on the season and 2-1 in the CAA standings. The Blue Hens fell to 2-4-1 and 0-3 in league play.

“Conference road games are never easy and Delaware started the game better than us and had some good chances,” said Elon head coach Marc Reeves. “I did feel like we got control of the game for decent periods and scored two very good goals. We need to prepare and play better, but anytime you can get max points on the road in this tough league is a good thing.”

• Elon was attacked early by the Blue Hens as Delaware had a shot on goal just one minute into the match. Delaware’s Jordan Miller played the ball off a cross and headed it towards the goal, but Elon’s Ryan Bilichuk was able to corral it.
• The Blue Hens nearly broke through again for the first score of the game near the 16th minute. Sam Donnellan received a through ball inside the box and fired a shot between a couple of defenders, but Bilichuk again came up with the stop.
• The Phoenix had its first shot on target in the 22nd minute. Jack Dolk beat a pair of defenders into the middle of the field and found Jeppe Jordoson streaking down the left side going into the box. Jordoson fired a left-footed shot that Blue Hens’ keeper Adam Vik made a kick save on the ball to keep the match scoreless.
• Elon broke through with the first goal of the contest in the 33rd minute. Petro Klishch took a pass near the back post from Jordoson and was able to chip in a shot over the keeper to put the Phoenix up 1-0.
• A goal late in the second half by the Phoenix doubled its lead over the Blue Hens in the 74th minute. Michael Clow sent a cross to Kasper Lehm who was able to send a pass before reaching the end line to Calle Edelstam near the six-yard area in the box. The sophomore chipped the ball into the top left corner to put the Phoenix ahead 2-0.
• Edelstam nearly had the brace two minutes later as the Djursholm, Sweden, native found himself with another good look near the top of the box. Vemund Hole Vik beat the defense from the right side and sent a pass to Edelstam, who sent another shot towards the top left corner. Vik however was able to make the stop.
• Delaware would have one final shot for the remainder of the match, but it was offline as Elon held on for the 2-0 win.

NOTES
• The Phoenix outshot the Blue Hens, 11-9, with a 5-2 advantage in shots on goal. It was the fourth straight game Elon has outshot the opponent.
• Bilichuk had two saves in goal for the Phoenix while his counterpart Vik made three stops. It was also the fifth clean sheet of the season for the Greenville, SC, native.
• Klishch and Edelstam scored their first goals of the season with Klishch adding his first goal of his career.
• Elon’s three-match shutout streak is his best stretch since having four consecutive clean sheets to start the 2017 season. The Phoenix has not conceded a goal in 311 consecutive minutes of play.
• The win moved Elon to level its all-time series ledger versus Delaware at 4-4-1 with the Phoenix winners of the past two matchups.

The Phoenix is ​​back on its home pitch at Rudd Field on Tuesday, Sept. 20, hosting fifth-ranked Duke. That match is scheduled for a 7 p.m. kickoff.