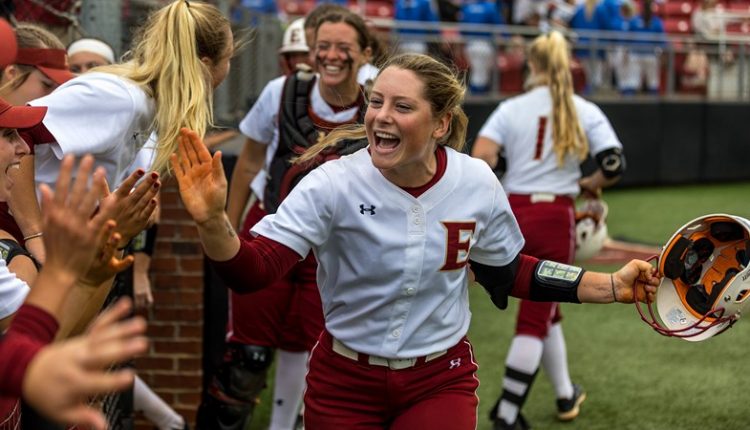 ELON, NC – The fourth-seeded Elon University softball team opened its play at the 2022 Colonial Athletic Association Softball Championships with a 5-0 victory over fifth-seeded College of Charleston on Thursday morning, May 12, at Hunt Softball Park.

• Elon recorded seven hits at the plate led by a 3-for-3 performance from junior Carley Davis. Davis also added two RBI to her stat line. Megan Grant also had a pair of hits for the maroon and gold, going 2-for-3.
• Allee Seering added two more RBI on her third homer of the season in the bottom of the fourth inning. Rebecca Murray also added an RBI for the Phoenix and her third triple of the season.

In the Circle
• Taylor Cherry improved to 7-6 on the season after the rookie pitched 5.0 shutout innings and allowed two hits with three strikeouts.
• Alexa Nemeth and Isley Duggins pitched an inning each in relief for Elon with the pair allowing only one hit between them.

• The Phoenix took a 1-0 lead in the bottom of the first. Murray reached on a fielding error and stole a second to move into scoring position with two outs. She later scored on Davis’ RBI single to plate the first run of the game.
• Elon added two more runs in the bottom of the third. Grant reached on a two-out single and scored after Murray hit a triple into right field. Davis came through with her second RBI of the contest on her single to left field to score Murray and put the Phoenix ahead 3-0.
• Another two-out rally by the Phoenix added to its lead in the fourth frame. Keagan Goldwait drew a 3-1 free pass with Seering coming to the plate. Seering worked a full count before connecting on her third round tripper of the season as the two-run shot moved the Phoenix ahead 5-0.
• The Cougars would have a pair of runners reach in both the top of the sixth and seventh inning, but Elon finagled his way out of both jams to leave the shutout intact for the 5-0 win.

• The win was the 272nd for Phoenix head coach Kathy Bocock at Elon, five victories shy of tying the program’s all-time mark.
• Murray stole her CAA-best 24th base of the season. That’s the most for a Phoenix player in a single season since Tomeka Watson swiped 25 bags in 2013.

Elon is back on the diamond this afternoon, facing No. 1 seed Delaware at 4 pm