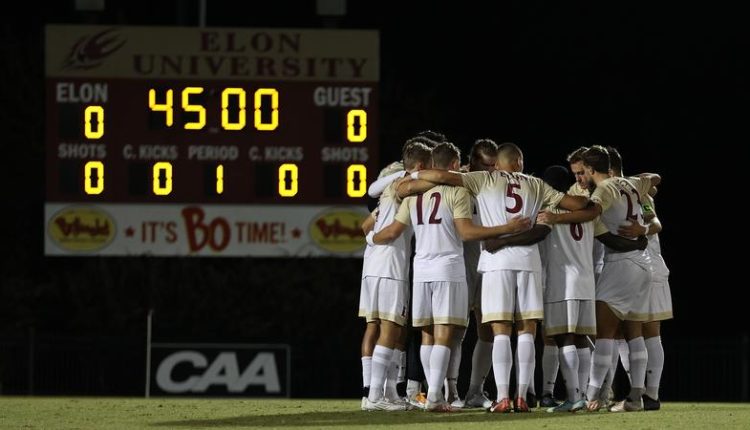 ELON, NC – The Elon University men’s soccer team travels down I-40 for a midweek matchup at UNCG on Wednesday night, Oct. 5 at the UNCG Soccer Stadium. Kickoff is set for 7 p.m

This matchup was originally set for Tuesday, Oct. 18, but had to be rescheduled to accommodate the Phoenix hosting North Carolina on that date. Elon and the Tar Heels were slated to play on Oct. 4, but that game was postponed due to inclement weather from Hurricane Ian.

• Wednesday’s match will be streamed live on ESPN+ via a paid subscription.
• Links for the broadcast and live stats can be found on the Elon men’s soccer schedule page at elonphoenix.com.
• Other in-game updates will be provided on Twitter by following @ElonMSoccer.

• UNCG owns a 13-11-1 record against Elon all-time in a series dating back to 1974. The Spartans have won two out of the past three regular-season meetings.
• Both teams last played during the truncated 2021 spring season with the Spartans coming away with a 2-0 win at Greensboro.
• The Phoenix’s last regular-season win in the series came in 2019 with Elon earning a 3-0 result at Rudd Field.

• Elon hosted Drexel on Saturday, Oct. 1 and earned a 3-0 victory over the Dragons. The win was the Phoenix’s fourth straight during Colonial Athletic Association play to improve to 4-1 during league play.
• Myson Darden scored the Phoenix’s first goal of the game in the 34th minute. Darden headed in his first goal of the season off a corner kick serviced in by Scott Vatne.
• The Phoenix went up 2-0 in the 66th minute as Michael Clow connected on his second goal of the season off feeds from Darden and Franc Gamiz Quer.
• Mason Duval concluded the scoring for the Phoenix as the striker was able to add his team-best fifth goal of the season in the 86th minute. The George Town, Cayman Island, native scored off feeds from Vemund Hole Vik and Sam Durand.
• The Phoenix improved its all-time ledger versus Drexel to 5-2-1 and snapped its three-match winless streak versus the Dragons.

• Darden became the fourth Phoenix player to be named the CAA Defensive Player of the Week as he was rewarded by the league office on Monday.
• Darden was a key contributor in the Phoenix’s two clean sheets last week. The Raleigh, NC, native played the entire second half versus High Point, holding the Panthers to only three shots in the second stanza in Elon’s 0-0 draw.
• His effort on Saturday versus Drexel helped the Phoenix shut out a Drexel team that came into the match leading the CAA in goals scored while holding the Dragons to only one shot in the second half.
• Elon has had the CAA Defensive Player of the Week four times this season. Darden joins Ryan Bilichuk, Vemund Hole Vik and Kasper Lehm as honorees that have received the weekly accolade for the maroon and gold.

• The Elon defense has posted seven clean sheets through its 10 games while posting a shutout percentage of .700. Both marks are best in the country.
• Along with their CAA weekly accolades, both Lehm and Hole Vik garnered national recognition as well this season. Lehm was named to the College Soccer News and Top Drawer Soccer National Team of the Week on Sept. 20 while Hole Vik received honorable mention honors on Sept. 13.
• Netminder Ryan Bilichuk is the sole NCAA leader in shutouts with seven and is also tops in the country in goals-against average at 0.40. The Greenville, SC, native is second in the CAA in save percentage at .862.

• The Phoenix is ​​off to its best start since 2016 at 7-2-1 overall and is atop the CAA standings at 4-1. Elon is also currently second in the Atlantic Regional rankings and was the only CAA team receiving votes in the latest United Soccer Coaches poll.
• Elon is second in the CAA in goals per match (1.60) and has a league-best 1.20 differential margin.
• The Phoenix holds an overall 124-93 advantage in shots over the opposition. Elon also has a 56-30 advantage in shots on goal, hitting the target at a .452 percent clip.
• Duval leads the Phoenix in points (10) and goals (five). The senior striker is sixth in the CAA with two game-winning goals.
• Elon has recorded 16 goals from 10 unique scorers this season after Darden joined the scoring tally last week.
• The Phoenix is ​​coming off a 9-8-2 ledger during the 2021 fall season and advanced to the CAA Championship final for the first time in school history.
• Elon returns 21 players and seven starters in 2022 including All-CAA performers Kasper Lehm and Jannik Videbaek. The maroon and gold also welcomes back a pair of CAA All-Rookie team players in Calle Edelstam and Scott Vatne.
• Both Lehm and Videbaek were selected to the 2022 Preseason All-CAA team. The Phoenix as a team was tabbed third by the league’s head coaches in the 2022 CAA Preseason Poll.
• Three players will don the captain armband for the Phoenix this season. Videbaek joins returning captains Jeppe Jordoson and Marco Vesterholm as the team captains for the 2022 season.
• Elon welcomes eight newcomers to its roster for 2022 – Gustavo Atencio, Ryan Bilichuk, Michael Clow, Myson Darden, Carlos Levy, Majaliwa Msabaha, Sumner Nenninger and Franc Gamiz Quer.
• Marc Reeves is in his sixth season as the head coach of the Phoenix. Through his 12 seasons overall as a head coach, Reeves has posted a career record of 113-80-34 with 38 of those victories coming at Elon.

• The Spartans come into the match with a 6-1-3 record after earning a 5-1 result over Furman on Saturday. It was the fourth time this season that UNCG has scored five goals in a game.
• UNCG was receiving votes in the latest United Soccer Coaches Association poll and was sixth in the South Region Rankings.
• Tabbed as the favorites in the 2022 Southern Conference Preseason poll after going 13-4-1 last season, UNCG has scored 27 goals this year – eighth in the country. The Spartans are also ninth in the nation in scoring offense at 2.70 goals per match.
• Seven players for UNCG have multi-goal efforts this year with Steven Hernandez pacing the squad with his five goals. Sophomore midfielder JC Ngando has a team-best 13 points with his three goals and seven assists.
• In goal, Niclas Wild has appeared in every game for the Spartans and has a GAA of 0.80 with 21 saves and three shutouts.

The Phoenix is ​​back on the home confines at Rudd Field on Saturday, Oct. 8, hosting William & Mary. That matchup is scheduled for 7:30 pm