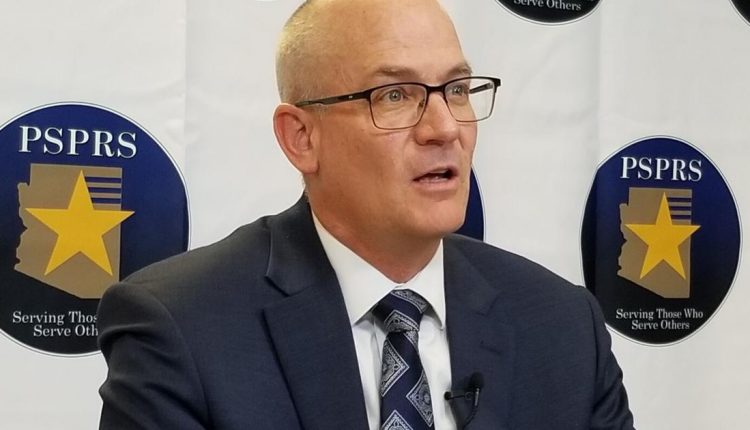 But those government entities still have a long way to go before they erase their huge unfunded liabilities and none has a bigger debt among them than the city of Phoenix.

That accounts for nearly half the $8.84 billion of the plan’s unfunded liability that existed at the close of the 2021-22 fiscal year on June 30. For the entire state system, including county and state corrections officers’ retirement plans and the plan for judges and elected officials, that number was $10.9 billion.

“I think it’s great,” said PSPRS Administrator Mike Townsend, who has been in the job since November 2019.

“This system has been underfunded for so long and those lingering unfunded liabilities just ended up costing taxpayers more and more money over time,” he said, calling the government employers’ additional pay-downs “a huge move.”

“I think also it speaks well to the staff that we’ve put in place and the changes we’ve made,” he added, referring to both his agency’s investment strategies and other internal moves as well as the vibrancy of Wall Street prior to its current woes.

Phoenix was part of the overall effort to attack the pension debt. Records show it made $65.6 million in additional payments over the last two fiscal years.

City officials don’t expect to pay off that debt until somewhere around 2042, according to testimony they gave last year before city council.

The effort by local governments to pay down their unfunded pension liabilities isn’t just a matter of kindness for the men and women who spent years putting their lives on the line day in and day out. It’s a legal obligation with genuine operational consequences that impact municipal spending decisions and capabilities for everything from supplies and infrastructure to payrolls. Former Phoenix City Manager Ed Zuercher outlined those consequences for his city council in June 2021.

At the time, he sought permission to borrow $1 billion at a fixed-interest rate of about 3% to pay down part of the city’s total $5.4 billion pension debt — which includes other plans besides the $3.4 billion PSPRS debt. It pays a 7% rate on its back payments to PSPRS.

“This taxpayer burden must be balanced with being fiscally responsible and committed in providing pensions to retirees,” Zuercher told Council in a memo.

And he noted that “while currently manageable, this pressure will continue into the foreseeable future.

“Further, credit rating agencies and lenders place strong consideration on the funding plan and funding levels of the City’s pension systems when determining their view of the overall financial health of the City,” Zuercher said.

This chart compares rising costs between the city’s pension plan for public safety personnel and the plan that covers other city workers. (City of Phoenix/Submitted)

Though several Phoenix Council members, including Mayor Kate Gallego, voiced support for Zuercher’s proposal, it never came up for a vote.

When he released the city’s 2022-23 spending proposal in April, City Manager Jeff Barton said employee pension costs overall “have consumed a growing share of our General Fund GF resources.” He acknowledged “the significant unfunded sworn pension liability unfunded liability to PSPRS” but only said it “will require continued diligence and further resource strategies in the coming years” to address it.

Phoenix aside, the status of the state retirement plan for public safety retirees and retired court personnel and corrections officers appears to be on solid footing. Although the final results of PSPRS’ investments for the 2021-22 fiscal year won’t be known for a few months, Success in the 2020-21 fiscal year drew kudos in the Pensions & Investments annual 1,000 Largest Retirement Plans report.

It said the combined PSPRS plan pension trust and defined contribution plan assets under Townsend’s management grew 44% to $16.1 billion in 2020-21, exceeding the percentage growth of all public pensions in the top 200 of the largest 1,000 US retirement plans surveyed.

Townsend said his agency’s success was more than just a matter of hiring new auditors, new actuaries, changing “a lot of the actuarial assumptions and the processes of how we’re managing the money.”

It also was a matter of convincing the municipalities and other government employers about the efficacy of those changes and showing them options for whittling down their pension debt.

“When you think about the decision makers, you’re talking about elected boards and councils around the state,” Townsend said. “They’re not pension people, obviously, and a lot of them are really not financial people. They need to get to a place where they can understand and understand what we’re doing.”

The agency’s moves increased the government employers’ trust in the system, which had been battered more than a decade ago by the Great Recession of 2007-08.

The Legislature last fiscal year applied $1.15 billion to the state public safety and corrections officers’ pension debts. Over the last two years, Maricopa County has put an extra $10 million into its jail officers’ pension plan, which is only 56.7% funded with an unfunded liability of $283.7 million, PSPRS records show.

Tempe led all cities in Arizona with its additional police and fire pension debt contributions — $341 million last year alone. Even so, both its police and its firefighter pension plans are only about 45% funded with a total unfunded liability of $341 million.

“Clearing this much unfunded pension debt off the books in a single year takes an incredible amount of resolve and initiative among employers throughout the state,” Townsend said. “It also takes faith in our commitment to protect members’ retirement benefits and to help employers and taxpayers save money.”

Townsend said his agency is working to help governments pay down their pension debt in a somewhat less burdensome manner. He said it will take years to eliminate that debt and voiced optimism that municipalities at some point in the future will have another opportunity to secure fixed-interest loans that will make it easier to pay off their PSPRS obligations. He also said PSPRS is recalculating their contribution rates “to get their payments down to something similar to debt financing where they’re on more of a level dollar amortization for those unfunded liabilities.”

“They’re on a big way down,” he said. “They’re going to pay it down one way or the other and so we’re changing the system to help account for that. If they want to put additional cash up front, pay it down faster, it just makes it better for them.”