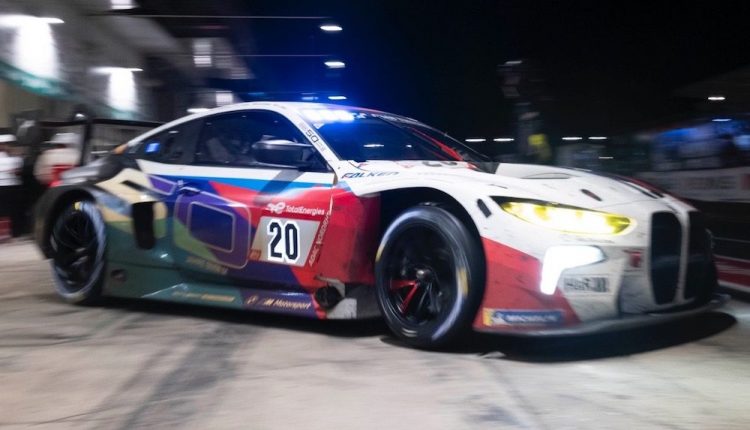 A pit stop for Audi Sport Team Phoenix brought Jesse Krohn in the Schubert Motorsport BMW M4 GT3 to the head of the Nürburgring 24 field at the halfway point of the race.

The Phoenix team’s No. 15 Audi R8 LMS GT3 Evo II and the Shubert car have been taking turns to lead over the last four hours courtesy of different pit stop strategies.

Phoenix moved into first place after around seven hours when the TF Sport Aston Martin Vantage GT3 crashed at the right-hander before the Dottinger Hohe straight.

At that time, Audi driver Frederic Vervisch led Maximilian Goetz in the No. 3 GetSpeed ​​Mercedes-AMG GT3 Evo and Alexander Sims aboard the Schubert BMW entry.

With Schubert typically stopping three 25 km laps later than Phoenix, and four laps later than GetSpeed, the Oschersleben-based team cycled ahead each time its rivals pitted.

This has made it difficult to tell which car will emerge with the strategic advantage, but all three have been running consistently well at the sharp end of the SP9 order.

Phoenix generally held a cushion of around 15 to 20 seconds over GetSpeed ​​for Vervisch versus Goetz, and also during Vanthoor’s double stint against Adam Christodoulou that fed into the 12th hour.

That was until just after those two drivers swapped out, as Robin Frijns concluded the Audi’s out-lap behind the no. 3 Mercedes-AMG now driven by Fabian Schiller.

A pit stop for Daniel Juncadella in the No. 4 GetSpeed ​​Mercedes-AMG enabled Kuba Giermaziak to sit fourth at the 12-hour mark behind the wheel of the No. 16 Sherer Sport Team Phoenix Audi, with Thomas Preining close behind for Porsche outfit Dinamic Motorsport.

the no 16 Audi and the Porsche have quietly crept up the leaderboard due to a mixture of their durability and accidents for high-flying cars.

Rene Rast was sixth at halfway, and contributing to a recovery drive after his co-driver Nico Mueller incurred a 92-second stop and hold penalty for causing a collision.

Mueller was sanctioned after he tapped Alessio Picariello’s No. 44 Falken Motorsports Porsche around at Turn 2. The Porsche was then struck by the Opel Astra driven by Stellantis executive Carlos Tavares, causing damage that ended the No. 44 car’s day.

Another Audi to encounter a setback during the night was the No. 5 Scherer Sport Team Phoenix R8 that crashed out with Kelvin van der Linde at the helm nine hours in.

The South African was trying to lap the Bioconcept No. 420 Porsche 718 Cayman GT4 Clubsport through the first part of the Schumacher S when the left-rear corner of his Audi clipped the back marker and sent both cars into the left-side tire barriers.

Van der Linde still has a chance of winning the race as a member of the Audi Sport Team Phoenix crew alongside Vanthoor, Vervisch and Frijns.

Black Falcon’s No. 121 crew continued to lead the all-Porsche CUP 2 category, while the factory no. 830 Hyundai Elantra N TCR was the top touring car in 31st overall.