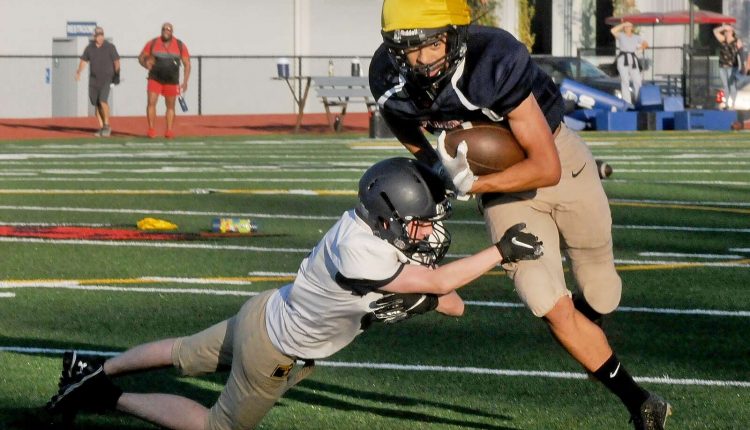 PHOENIX — The 2021 football season had barely finished when Phoenix coach Mike Robinson knew what he wanted to do with it: Put it behind him as quickly as possible.

The Pirates, facing ongoing challenges from the Almeda Fire that devastated the town in September 2020, found themselves woefully outmatched at nearly every turn, and the win-loss record reflected it.

Phoenix went 0-8 overall and 0-5 in the Skyline Conference. It was shut out twice, scored only one touchdown in each of three other games and was outscored by an average of 48-10.

“For the most part,” said Robinson, in his second year, “we tried hard to be competitive, but we were just outmanned and outbodied and outgunned at many positions last year. The majority of our team had a lot of freshmen playing, and sophomores.”

Among the ramifications of the past couple years has been a move to a lower classification for football.

The Pirates will play in the Far West League this year, a 10-team loop of Class 3A teams that includes state playoff favorites Cascade Christian and South Umpqua as well as former Skyline mate North Valley, which moved to 3A for all sports.

“We just want to be competitive,” said Robinson, a former Southern Oregon University fullback who dabbled in the Arena Football League before a knee injury ended his playing career.

“We’ve had a lot of setbacks with natural disasters that have kind of decimated the population,” he said. “We had to drop down to another level so we could be more competitive. Throughout the summer, our kids have been coming steady, and we’ve had scrimmages against some of these other schools. They (Pirate players) have shown to have grit and to fight pretty hard.”

As for the lasting impact of the fire on the community, particularly the student population, it’s been “huge, huge,” he said.

“It’s just housing, and affordable housing, and people being able to move back into the area,” said Robinson, who works as a medical social worker in Jackson and Josephine counties with AccentCare Asante Home Health.

The district is still using the McKinney-Vento Homeless Assistance Act to help bus in kids who have been displaced, he said.

However, said Robinson, many families were forced to transfer to other new areas, and some students needed to work to help their families, impeding their availability for practice and games.

“We’re just hopeful that as housing has increased, we can get our student population back to where it needs to be,” he said.

A byproduct of playing a slew of youngsters last season is that Phoenix returns nearly all of its starters. There are nine back on offense, 10 on defense.

They engaged in scrimmages with St. Mary’s and North Valley this summer, allowing an opportunity to learn and jell in Robinson’s system following a couple years stunted by the fire and COVID-19.

“They’re physical and they’ve been working together all summer,” said Robinson, who wants a balanced attack between rushing and passing.

Senior Jair Ramirez will be the featured running back, and senior Hunter Everhart is back at quarterback.

“The biggest thing we need from our quarterback is ball control and being a leader at that position,” said Robinson. “His strength is his arm. He’s got a really good, strong arm. He’s been able to read and become more decisive in that position.”

Senior Charles Butcher, a 255-pound fullback, adds force to the backfield, while sophomore Derek Corder and junior Jackson Shilts are expected to get carries, along with freshmen Luke Jennings and Cody Martin.

The backfield depth will allow Robinson to “spread the ball around and try to keep kids healthy,” he said.

Defensively, safeties Selden and Shilts are the lone returning Pirates who were on the all-league team last year, each earning honorable mention. Cornerbacks Jimenez and sophomore Julian Montez fill out the secondary.

Selden led the team in tackles from his free safety position a year ago.

“It’s just his engine,” Robinson said of the team captain. “The kid is all over the field. He’s not afraid of contact.”

Corder and junior Hayden Hicks are returning linebackers, while defensive linemen back are ends Ramirez and Butcher, tackle Rangel and nose tackle Mendoza-Cortez.

Phoenix gets a major test in its first game, at home against South Umpqua. The Lancers were state runners-up last season.

“Like I said,” said Robinson, “we just want to be competitive and kind of get the spark back, not only for the kids at the school, but the community as well.”

Tim Trower is a freelance writer. To comment on this article, write to [email protected]

Average gas price falls below $4 in Arizona, after record-high summer