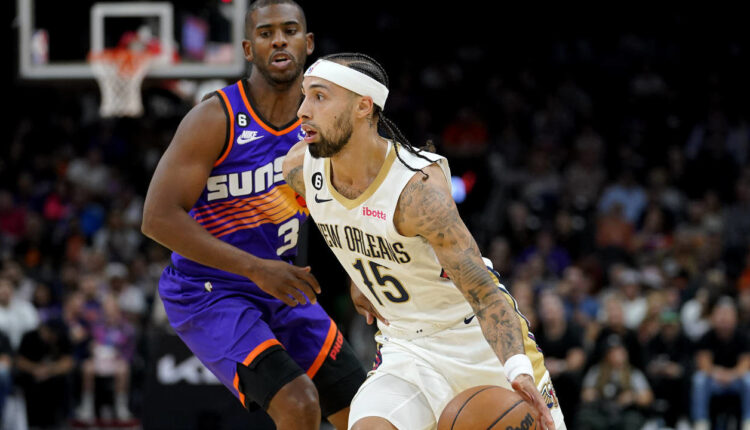 When the New Orleans Hornets beat the Minnesota Timberwolves on April 9, 2008, they improved to 55-23, sitting atop the Western Conference while being led by a first-time All-Star 22-year-old point guard. He was taking his first major steps forward to becoming the best player of his generation at that position, leading the league in both assists and steals per game.

Fifteen seasons later, a lot has changed for Chris Paul. For New Orleans, April 2008, that was the last time the since-renamed Pelicans were in first place in the conference that deep into a season, per ESPN’s Andrew Lopez. They regained the top spot this year when they won on Wednesday and the Suns lost.

New Orleans has won 10 of its last 12 games and is now 16-8. The Suns, meanwhile, are coming off their worst two regular season losses since Paul got to Phoenix, and they came in back-to-back games to drop them to 16-9.

The two teams could not be heading in more different directions this week, which makes it all the more interesting how much that will correlate with meetings in New Orleans on Friday and Sunday, not to mention a third matchup in nine days on Dec. 17

The Pelicans, armed with a roster full of offensive threats, have surprisingly found a groove over the last dozen contests with defense. Lopez further detailed the play here, and looking at every NBA team’s last 12 games entering play on Thursday, the Pelicans’ defensive rating ranks second in the NBA. For the overall season, they are now third.

That’s with an offense over the last two-plus weeks that still slots in at seventh.

To those of you who were sitting right alongside me on the New Orleans bandwagon after last year’s playoff series, this actually isn’t a surprise and the primary reason why the Pelicans are so dangerous. Winning habits defensively take a while to mate, but head coach Willie Green, the brains behind Phoenix’s excellent defense in Monty Williams’ first two seasons with the Suns, was always going to get his group to be at least competent on that end.

Offensively, while some players being in and out of the lineup have impacted the numbers a bit, the Pelicans have seven players averaging double-digit points per game over that dozen games. And if we round up Larry Nance Jr.’s 9.5, it’s eight.

Zion Williamson, who was among the handful of key Pelicans to miss the first matchup between these two teams, is now in world-beater form. Over his last five contests, it’s 28.0 points, 9.8 rebounds, 6.0 assists, 1.8 steals and 1.6 blocks a night for Williamson.

Hey, as they say, hath the world as his oyster. Williamson’s talent level is so insanely high that he could become a superstar at any moment as the No. 1 option on a contender.

That’s before getting to CJ McCollum and Brandon Ingram as the supplementary scorers on this team.

And we are seeing the type of breakouts from a few of the younger role players we expected. Trey Murphy III is at 15.4 points per game over our 12-game sample size, and Jose Alvarado is proving he is far, far more than just a pest.

Alvarado is at 11.9 points a night, showing he is a legit shooter (39.2% on four 3s a game this season) and an emerging playmaker off the bounce. Yes, he exploded for 38 points off the bench on Sunday, but the stuff he’s doing beyond hot shooting is more impressive.

The Pelicans outscore teams by 13.5 points per 100 possessions when Alvarado is in, the best net rating on the team.

In the playoffs, Alvarado was a rookie the Suns were more than OK with letting beat them by either helping off him as an off-ball shooter or inviting dribble penetration to let him make the defining play of the possession — rather than one of the star ball handlers.

Alvarado looks like the type of player who will beat a team in the postseason now if he is schemed that way again.

The second-year guard is questionable for Friday’s game due to a rib injury while starters Ingram (toe) and Herb Jones (ankle) have already been ruled out.

But New Orleans still has enough firepower to present problems.

Nance has expectedly been a wonderful fit with the Pelicans, and Green is wisely using him almost exclusively as a center. When that’s been next to Williamson across 234 minutes, it’s a 16.0 net rating.

And when Alvarado joins them in the Williamson-and-the-bench lineups, that trio is an absurd +74 in 122 minutes.

It would be nice timing for Paul to start looking like the Point God more after an uninspiring start to the season, although the point guard recently returning from a 14-game absence might be asking for too much.

But he does get to come back to New Orleans and play at the Smoothie King Center for the first time since one of the best closeout performances in playoff history, a 14-for-14 masterpiece of 33 points, five rebounds and eight assists. Perhaps that’ll give him the mojo he needs.