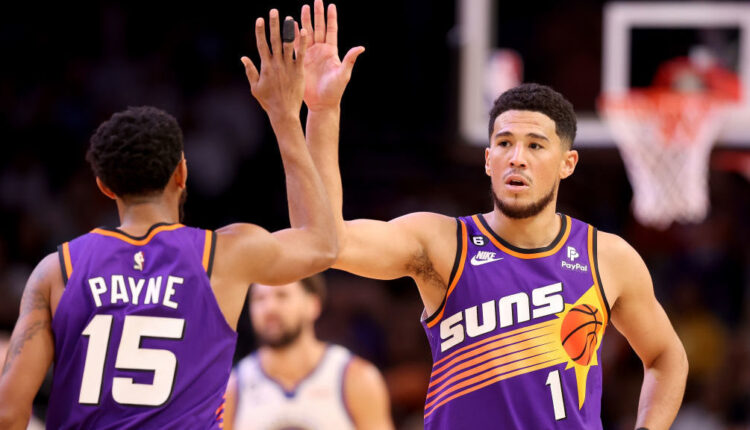 Devin Booker #1 of the Phoenix Sun high fives Cameron Payne #15 after scoring against the Golden State Warriors during the first half of the NBA game at Footprint Center on October 25, 2022 in Phoenix, Arizona. The Suns defeated the Warriors 134-105. NOTE TO USER: User expressly acknowledges and agrees that, by downloading and or using this photograph, User is consenting to the terms and conditions of the Getty Images License Agreement. (Photo by Christian Petersen/Getty Images)

The Phoenix Suns will be without the services of point guard Cameron Payne Thursday against the Los Angeles Clippers, while guard Devin Booker and center Deandre Ayton are questionable, according to the NBA’s injury report.

Payne suffered a sprained right foot that held him to less than nine minutes in Phoenix’s 111-97 defeat against the Houston Rockets on Tuesday. He has missed only two games this year and is averaging a career-best 12.7 points per contest. He started in place of Chris Paul during the veteran’s 14-game absence with a heel issue.

Booker has been out for the last two games with left hamstring tightness. General manager James Jones told Arizona Sports’ Burns & Gambo on Wednesday that he’s hopeful booker will be able to return against the Clippers.

The Suns posted photos on Twitter of Booker shooting in Los Angeles.

Jones was much less sure on Ayton and his left ankle sprain, saying the big man was still being evaluated.

Ayton also exited Tuesday’s game against Houston, and he only played 14-and-a-half minutes. He scored 25 and 28 points in his previous two games, respectively.

The Suns are looking to end a five-game losing streak.

They’ll take on a Clippers squad on the second night of a back-to-back after facing the Minnesota Timberwolves on Wednesday.

The U.S. Supreme Court could fall on this slippery slope of discrimination