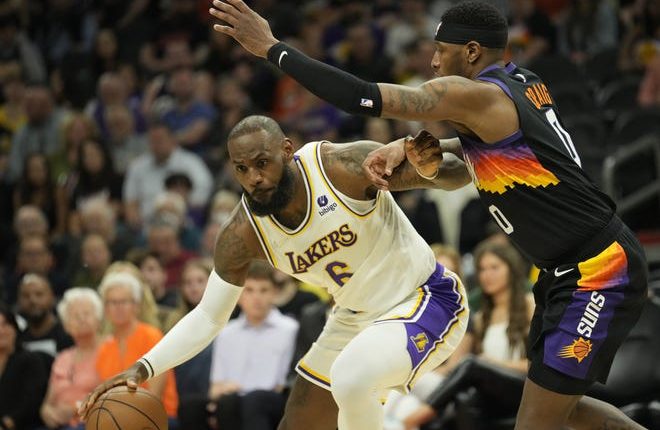 OKLAHOMA CITY — The Phoenix Suns are still trying to get that 63rd win to set the franchise record for victories in a single season.

The Los Angeles are desperately trying to stay in contention for a spot in the play-in tournament.

Those two objectives will collide Tuesday inside Footprint Center.

“We know the situation that we’re in, especially with losing today (to Denver),” Lakers forward Anthony Davis said to reporters Sunday in Los Angeles. “It’s another must-win, must, must-win in Phoenix. A team that’s playing well, but also can be beat, but the spirits are high.”

The Suns (62-16) have lost their last two games Friday at Memphis and Sunday at Oklahoma City by 21 points while the Lakers (31-47) have lost six in a row.

“Everybody is talking about winning 63 games and breaking, I have not done that one time cause I understand how important preparation is and how important the next meeting is or the next whatever we have,” Suns coach Monty Williams said after Sunday’s loss. “You can’t get too far ahead. We can’t even look at the playoffs. We’ve got to figure out how to get back to the standard of play we typically put on the floor.”

Losing Sunday to Denver, the Lakers are now two games behind 10th seed San Antonio for the last play-in spot in the Western Conference.

“We’ve got to take it one day at a time,” Lakers guard Russell Westbrook said to reporters Sunday night in Los Angeles. “Go out and compete to the best of your ability. Don’t leave anything on the floor. Whatever the results are, you can live with it.”

San Antonio’s magic number for clinching 10th in the West is two games.

With all three teams having four games left, San Antonio has the third-toughest schedule remaining, Los Angeles has the fifth toughest and New Orleans has the 13th toughest according to tankathon.com.

The Spurs have won six of their last seven games while the Pelicans are 4-2 in their last six games.

LeBron James missed Sunday’s game with a sore left ankle while the Suns, with the No. 1 overall seed locked up, rested Devin Booker, Deandre Ayton and Jae Crowder (right ankle soreness) against the Thunder.

The Lakers are hopeful James can return Tuesday as he’s day-to-day, but Davis tweaked his foot injury Sunday that kept him sidelined for weeks this season.

The Suns have won six in a row over Los Angeles dating back to last year’s playoffs.

Before that beatdown, Davis said his groin injury was the difference in the Suns-Lakers playoff series that ended with Phoenix winning it in six games after falling down 2-1.

“They got away with one,” Davis told Lakers beat reporters.

In response, Booker said “if ifs was a fifth, we’d all be drunk.”

Davis hyperextended his knee in Game 3, injured his groin compensating for the knee issue in Game 4, sat Game 5 and re-aggravated his groin early in Game 6 and didn’t return.

He scored 34 points each in Game 2 and Game 3 the Lakers won in taking a 2-1 series lead, but Chris Paul played through an injured shoulder the entire series.