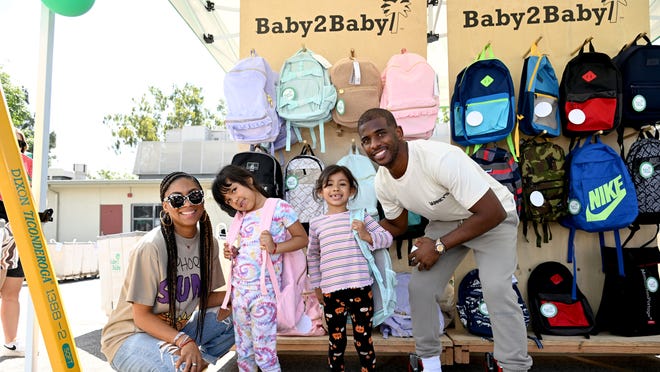 Chris Paul is a 12-time NBA All-Star. But he’s also a dad who had to get ready for back-to-school like every other parent.

Hundreds of students and their families attended the event, where they got to shoot some hoops with the NBA vet. Participants also received a new backpack and a new outfit for their first day of school. Baby2Baby provided other items such as groceries, diapers and formula to the families who come from underserved communities.

“We’re so proud to be a part of Baby2Baby’s Back2School event,” Chris and Jada Paul said in a statement. “As longtime supporters of Baby2Baby, it’s so rewarding to spend time with the kids and be able to distribute the school supplies and basic essentials they need to succeed this year.”

Baby2Baby has given away more than 240 million items in the past 11 years through its work with homeless shelters, foster care programs and hospitals.

The Paul’s have two children, son Chris Jr. and daughter Camryn. They said some items essential to them are a good backpack and a planner, which is great for staying organized in a family as busy as the Paul’s.

In addition to preparing for his 18th NBA season, Paul wrote a children’s book called “Basketball Dreams” and produced the documentary series “Why Not Us,” which is in its third season. It’s a life he knows he can’t do on his own.

“I’ve been able to find projects and stories that I genuinely love working on,” Paul told USA TODAY Sports+. “My business team allows me to be able to balance my basketball life, family and business.”

Basketball is very much a passion the Phoenix Suns point guard still prioritizes.

“Year 18 for me will be exciting,” he said. “I’m looking forward to getting back to work. Every year brings a new opportunity and I’m fortunate to still be able to play the game I love.”

The Suns will start the 2022-23 season Oct.19 against the Dallas Mavericks in a rematch of the Western Conference Semifinals.

Greenville Triumph holds off Tucson for 1-0 win on Saturday