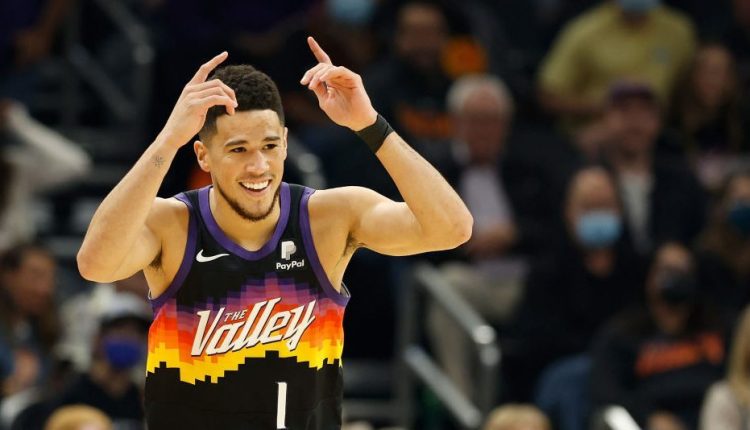 Devin Booker #1 of the Phoenix Suns reacts during the first half of the NBA game at Footprint Center on December 23, 2021 in Phoenix, Arizona. (Photo by Christian Petersen/Getty Images)

The Phoenix Suns continue to draw eyes around the league as superstar Devin Booker finished 13th in NBA jersey sales for the 2021-22 season.

With Booker finishing 13th for individual sales, the Suns ranked eighth as a team across the league, one spot ahead of the New York Knicks.

Last year, Booker finished sixth individually and the Suns came in third as a team.

Booker finished as the seventh-most sold jersey for guards but was ahead of Denver Nuggets big man and MVP frontrunner Nikola Jokic, who finished 15th.

The top five for team jersey sales were led by the Lakers, 76ers, Warriors, Chicago Bulls and Nets.

Of the top 15 jerseys sold, 14 of the 15 players all remain in the NBA playoffs, with Charlotte Hornets guard LaMelo Ball finishing 14th.

The Suns will travel to New Orleans to battle the Pelicans at 7 pm Catch all the action on 98.7 FM Arizona’s Sports Station.

Arrinten Page in the midst of a breakout spring