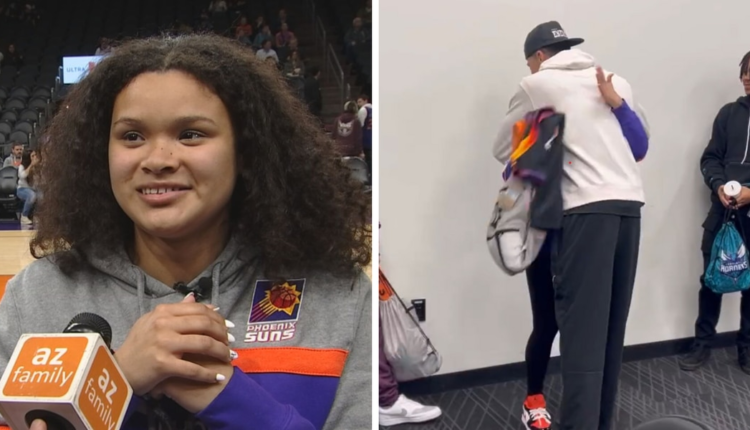 PHOENIX (3TV/CBS 5) — A Make-A-Wish teenager got a special visit from Phoenix Suns All-Star Devin Booker before tip-off against the Charlotte Hornets on Tuesday night. Booker showed up for a pregame visit for 17-year-old Breanna Amado, who was stunned by the surprise.

“What’s up crew?” Booker said as Amado gasped and began crying. Booker introduced himself to Amado and her family, and the two shared a hug. However, Booker didn’t leave without a few jokes about former teammate Kelly Oubre, who’s now on the Hornets. “I heard you like Kelly too. So who you rooting for?” Booker asked. “You,” Amado replied as the group began laughing. The All-Star then thanked Amado and others for coming out to the game. “It’s nice to meet you all, appreciate you all for coming out, supporting,” he said.

Amado and her family got to sit courtside to watch Booker and company. She also had the opportunity to meet Oubre before the game. “I didn’t expect it. I’m still in shock over it. I’m kind of speechless myself,” she said. Amado says meeting Oubre was her original wish in 2020. “He [Oubre] thanked me for meeting him for my original wish, which was what it was supposed to be. And he said he’s praying for me, and then he signed my shirt. And then he gave me a hug,” she said.

Amado was fighting leukemia several years ago but is now in remission. She talked about the highlights of her day, and meeting Booker was the icing on the cake. “Going to their practice facility, seeing everything where they train, seeing how tall they were, getting waved at. Just everything in general,” she said.