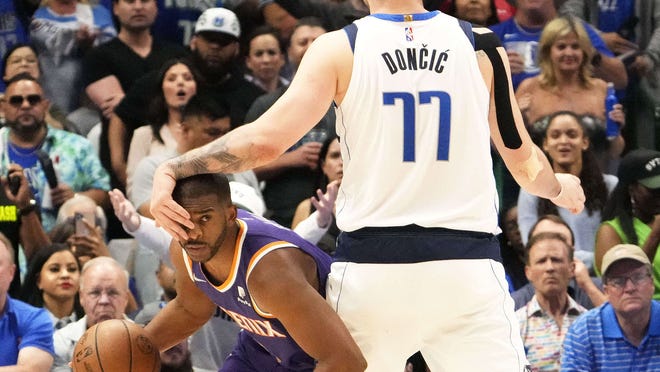 “I love it,” Ayton said. “It’s like AAU. Waking up and just playing basketball. Eating breakfast and getting ready for the game.”

The Suns are eager to get that bad taste out of their mouth from Friday night’s 103-94 loss in Game 3 at American Airlines Center.

“We like guys that have a level of chippiness,” Suns coach Monty Williams said after Saturday’s practice. “We love guys that are competitive. We love the tension in our gym after we lose a game and it was pretty thick today, which is what I like.”

“We all like to win,” Suns wing Mikal Bridges said. “Nobody likes to lose. It’s every single person in this gym. We try not to lose two in a row, ever whether it’s the regular season or playoffs. Just that feeling after losing, it doesn’t feel right. We all take it personal just in a way where we don’t like that feeling and just go out there and try to get a win the next game.”

The Mavericks got 14 more shot attempts Friday, scored 22 points off 17 Phoenix turnovers, and scored 16 second-chance points in snapping an 11-game skid against the Suns.

“We played at a high level,” Mavs coach Jason Kidd said. “We understand we have to play at a high level this time of the year. I thought the guys did a great job. The guys are mentally and physically good. Just understanding we’ve talked about Game 3 and Game 4 as a schedule with the late game and a quick turn. Understanding what rest means this time of the year both mentally and physically.”

The Suns are clearly looking to get up more than the 76 shots it did in Game 3 and cut down on the turnovers as Chris Paul committed seven and Devin Booker coughed up five, but also maintain composure when calls go against them.

“Let’s just hoop,” Ayton said. “At the end of the day, we let our game talk. We’re not the team where we got to keep being on the refs or picking up technical fouls. That’s not necessary. Making sure we play through all that stuff. It’s the playoffs. It’s going to be difficult on the road. We’ve just got to make sure we have our heads together.”

Paul and Bridges each picked up a technical foul in Game 3.

“That’s two of these playoffs,” said Bridges when realizing that was his third career technical foul, regular season and postseason.

Williams pointed out the Suns gave up an open 3 to Dorian Finney-Smith after Booker and Paul complained about the ball being called off Booker.

“We all have to turn the page,” Williams said. “I told the guys that this morning. I’m the main guy. I saw what happened and I didn’t agree with it, but they’re not going to change it. You have to move on to the next play and we didn’t, but it does bother you when you look at the film and see that you were right. That part bothers you, but in the game you can’t worry about it.”

It was the second consecutive 3 for Finney-Smith to begin an 11-0 Dallas run to turn a five-point deficit for Phoenix to 16 early in the third.

“We got into our actions quicker,” said Finney-Smith after scoring 14 points in Game 3, hitting 4-of-11 from 3. “Playing faster. I think that helped us a lot.”

The Suns may be without backup forward Torrey Craig for a second straight game as he’s listed as doubtful for Game 4 with a right elbow contusion suffered late in Game 2 on a fall over Mavs big Marquese Chriss.

“It’s hard to say,” Williams said. “He still has some soreness, but we’ll see (Sunday). It’s been a couple of days now. We just don’t know. I don’t want to make an official declaration about that, but he still had some soreness.”

After an offensive rebound, Chriss looked to put it back up, but Craig came over to block the shot.

Chriss stayed bent over and Craig landed on the back of Chriss, a former Suns player, before abruptly falling to the floor.