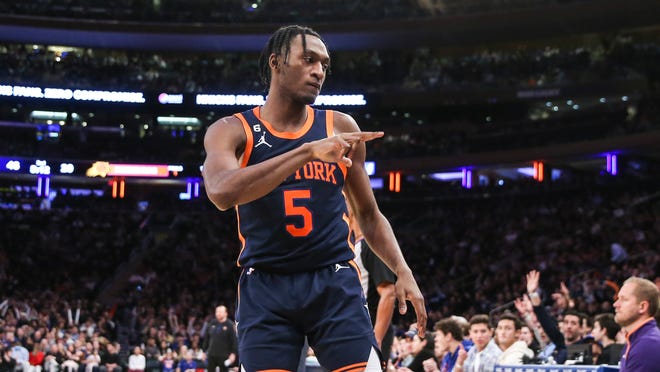 So, he reached out to Mitchell on Instagram to get a couple of things straight before they face each Wednesday night at Rocket Mortgage FieldHouse.

Bridges and the Phoenix Suns (20-18) have a tall task trying to stop Mitchell as they look to end what has been a rough six-game road trip with a win over Cleveland (24-14).

“You always want to finish out a road trip on a winning note, but in order to do that, it has to be a step-by-step process,” Suns coach Monty Williams said. “We have to stack solid as best we can and not get deflated if you miss a few shots. I thought that hurt us in the first half (Monday at New York).”

Losers of six of its last seven games, Phoenix is ​​1-4 on the trip with the win coming at Memphis. The Suns lost Devin Booker to a left groin strain in the first quarter of a Christmas loss to Denver to begin the road trip. He then returned to Phoenix.

“Don’t get crazy discouraged,” Suns All-Star point guard Chris Paul said. “We can run off 10 a row. You’ve just got to be consistent and try to be better.”

Now Phoenix has the follow-up game against Mitchell.

Williams sees Mitchell’s performance as just a continuation of explosive scoring nights throughout the league.

“Luka (Doncic) is going for whatever he’s doing, Book has gone for 58,” Williams said.

Doncic has scored at least 50 in three of his last six games that included a career-high 60 Dec. 27 against the Knicks.

“I’ve never seen so many guys score so many points like this close together. I don’t know if it’s the new league, officiating, shot making, I don’t know what it is, but I don’t know if that happened this frequently when I played. Once you got to 40, somebody was probably taking you out.”

Mitchell shot 22-of-34 from the field, going 7-of-15 from 3, but what stuck out to Williams the most was seeing Mitchell track down his own missed free throw and score with three seconds left in regulation to force overtime.

“You could see it coming,” Williams said. “It made us, we’re looking at what we’re doing in that environment ’cause that’s something we have to get better at.”

There are obvious keys to defending a great scorer like forcing him to his weak hand, contesting his shot and having solid help defense.

The Suns will likely implement those into their game plan for Mitchell with Bridges being the primary defender.

“I’ll just try to use my length and I got four teammates behind me to help,” Bridges said.

Williams said staying composed after Mitchell, a shot maker, hits a tough one is key to defending him as well.

“I don’t know if you can stop a guy like that,” Williams said. “I think you have to have the mental fortitude and stamina that when he does make a tough shot is to get the ball inbounds and go right back down the floor. I think too many times during an NBA season, you watch around the league, some of these really good players make shots and everybody is exasperated about it. That’s what they do. That’s why the guy makes $30-plus million a year. It’s like why are you surprised by that? You have to have, in my opinion, some stamina and poise in those moments and go right back at their team, not just Donovan.”