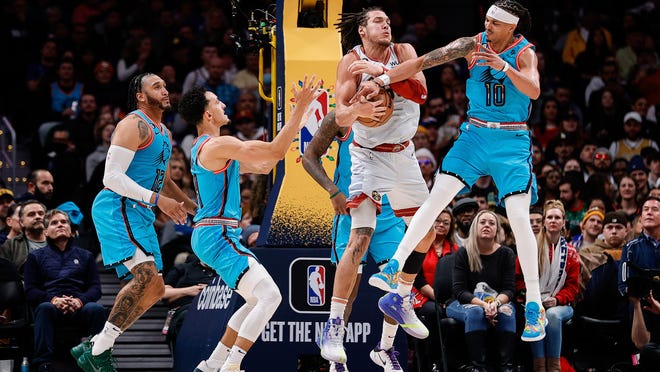 DENVER – The Phoenix Suns answered the physicality bell Monty Williams has been ringing.

They overcame losing Devin Booker again to injury and an early 15-point deficit.

Leading by eight points with under five minutes remaining in regulation, the Suns appeared on the brink of leaving Denver with a much-needed win on Christmas Sunday.

And Nuggets big Nikola Jokic kept delivering on his historic triple-double performance as all of that, along with missed free throws, proved to be too much for Phoenix to overcome in an 128-125 overtime loss.

“I think we played well, but we don’t really do those moral victories,” Suns All-Star point guard Chris Paul said. “Look at the film and see what we can do better.”

“I didn’t even see it,” Williams said. “They came to me. I was walking the sidelines and they said, ‘We got to get Book’ and I looked up, and he had that look on his face and I knew something had happened.”

Playing just four minutes and 20 seconds Sunday, Booker reached a point where he was just walking up the court and talking to himself when Phoenix was on offense.

While Phoenix’s best player was hobbled, Denver’s was having a special holiday night.

Jokic scored the most points ever on a triple-double on Christmas Day with 41 to go along with 15 rebounds and a season-high 15 assists in 44 minutes.

“Besides the numbers, the way he impacted the game, game-by-game, it makes sense why he’s back-to-back MVP,” Suns guard Damion Lee said. “Guy just knows how to play the game, plays the game at a high level.”

“You want to win games,” Shamet said. “It’s not about career high or whatever, any individual accolades. To me, I’ve always been that way. It doesn’t mean anything if you can’t come out with a W.”

Losing nine of their last 13 games, Phoenix has dropped its last three.

“That’s not us,” Sun’s big Deandre Ayton said. “I think tonight, we can sleep well tonight because we fought, and that’s our norm. We played hard.”

The Suns will look to end their losing skid Tuesday at Memphis, which beat them by 25 points Friday in Phoenix.

“Just got to keep playing, competing and try to get a win,” Paul said.

The Suns responded to Williams’ call to play more physical, they shot 17-of-35 from 3 and had six players reach double figures.

Ayton posted a double-double of 22 points and 16 rebounds while Lee scored 18 off the bench, hitting 4-of-5 from 3.

Paul finished with 17 points and 16 assists while Bridges and Torrey Craig each added 13 points.

“Give them a lot of credit,” Nuggets coach Michael Malone said. “Monty Williams is a hell of a coach, even better person. That team is coming off of a couple of tough losses and they gave us everything we could handle. We found enough to get the win on both ends of the floor. I’m proud of our guys.”

Two of Malone’s guys – Gordon and Murray – came up huge.

Gordon delivered 28 points and 13 rebounds with seven coming on the offensive boards and Murray scored 14 of his 26 in the fourth quarter.

“I don’t plan on it, you know getting hot,” Murray said.

Hitting 4-of-6 from 3 in the fourth, Murray forced overtime on a dunk with 11 seconds left in regulation.

“The big 3 where we lost Murray, where he sets the back pick and he slips out and gets a 3,” Williams said. “Those are the screening situations we got to get better at.”

Then in overtime, Gordon gave Phoenix a three-point lead, 126-123, with 24 seconds left on a transition dunk that was first ruled a charge.

With it being under two minutes in OT, the play was reviewed and Shamet was called for a block as he was ruled not in the restricted area.

“I was open,” said Jokic, as he was ahead on the play. “I saw it right away that (Gordon) was flying. I thought they didn’t call anything and then when they called the offensive, I thought no way. So, I’m glad they reviewed it.”

Shamet went back and looked at the play after the game.

“I was moving a little I guess,” he said. “It just sucks that bang-bang plays can be reviewed. I’m glad they’re making sure the games are called right.”

On top of all of that, missed free throws and turnovers compounded matters for the Suns.

Phoenix turned the ball over 14 times with Ayton committing six of them.

“We didn’t space the floor well,” Williams said. “His last one, instead of spacing in the corner, we brought the trap to the ball. A couple of times, we threw low passes to him where we put the ball down, and there was a crowd, a lot of hands, and that’s a tough place to try and put the ball down.”

“I didn’t know they were going to have guys come at me like that,” Ayton said. “That was an adjustment. I had to stop putting the ball on the ground so quick trying to score because soon as I put it down, they were there.”

Still, the Suns had a chance to force a second overtime, but they ended the game with a turnover as Bridges threw an errant pass with 4.1 seconds left.

“Tried to find Landry,” Bridges said. “Made a bad decision.”

Williams thinks Bridges should’ve looked for his shot at that point. Shamet had just missed a 3, but Lee got the offensive rebound to give Phoenix another opportunity to tie the game.

“In those situations, the way teams switch, you don’t have a lot of time to put the ball down because team will foul you,” Williams said.

Nuggets forward Bruce Brown tracked down the ball and ran out the clock.

“I was proud of the way we competed,” Williams said. “It just wasn’t enough to get the win.”