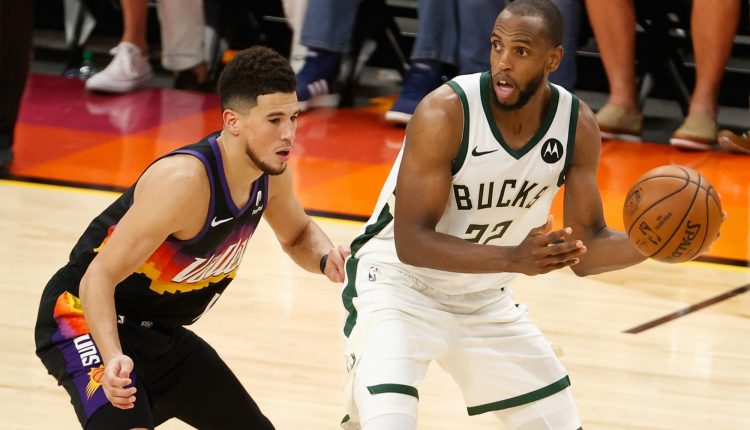 With the offseason in full swing, every Friday ‘Valley of the Suns’ will delve back into the archives to deliver readers a review into some of the best Phoenix Suns playoff performances of all-time.

Some games fall into the haunting memories of fans who wish not to speak its existence. However, the double edged sword can also unrightfully vanquish individual feats into an abyss they don’t belong to. In this Phoenix Suns Friday Flashback, we revive recent painful memories to remember the shining brilliance.

It’s game four of last year’s NBA Finals – the Phoenix Suns are trying to take a commanding 3-1 lead, while the Milwaukee Bucks are looking to tie the series up on their home floor.

Standing in Milwaukee’s way is Devin Booker, the Suns superstar who signaled his intentions by knocking down a mid-range jumpshot on the first possession of the game. He got Phoenix off to a bright start, before the Bucks responded with a burst early in the second period.

Booker’s final six minutes of the opening helped were exemplary, knocking down a series of tough left-handed finishes and contested fading jumpshots. He had 20 points by half, with the teams locked at 52.

His surge continued even more prominently in the third, single-handedly gaining the Suns an ascendancy. He had 18 points in the quarter, including six in the last two and a half minutes that separated the tie into a six-point Suns lead.

But after Cameron Johnson’s triple extended the lead to nine at the beginning of the fourth, the Suns fell into a mudslide that proved the turning point in the series. Until that point, the Bucks’ Khris Middleton had been having a serious game himself, producing 26 points through the opening three quarters.

In a matchup that belied modern basketball and re-lived a bygone era, Middleton matched Booker’s mid-range masterclass as he took over down the stretch. In what was a do-or-die situation for his team, Middleton scored 14 points and verified his match winning abilities across the last eight and a half minutes.

Booker, for all his brilliance, was rather subdued when it mattered most. After Middleton tied the game at 99 with two minutes remaining, Booker missed one of his often automatic jumpers before his counterpart went down and delivered again.

Yes, it’s a team game, but even in a loss for the Suns, Booker’s 42 points should still be remembered among fans as an unreal, memorable performance. It was matched though by Middleton’s 40, and with Giannis Antetokounmpo dropping 26 and 14 rebounds, the pair were a fraction too good.

It was a missed opportunity for fans, and particularly bookers, will come to rue. A 3-1 lead was ready for the taking and from there, they failed to win another game. Still, the scoring display was awfully impressive, giving optimism that Booker will rise to, and be ready for a similar opportunity again.